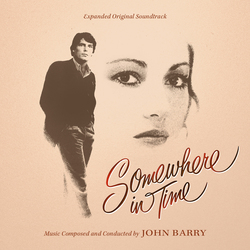 La-La Land Records, Universal Pictures, and Geffen proudly present a Limited Edition remastered and expanded CD reissue of renowned composer John Barry's original motion picture score to the beloved 1980 big screen romantic fantasy-drama Somewhere in Time, directed by Jeannot Szwarc and starring Christopher Reeve, Jane Seymour and Christopher Plummer. Barry's rich, gorgeous orchestral score perfectly embodies this heartfelt and heartbreaking romantic classic, enriching it with a resonating melodic and thematic timelessness that is vital to the film's powerful sentimental allure. As the director himself states, "John's music gave the film everything it needed. I still think it's his most beautiful score – and one of the most beautiful scores in the history of film."

Produced, mastered and edited from studio vault elements by Mike Matessino, this expanded CD is limited to 5000 units and features never-before-released score cues and additional music, including the music box arrangement of Rachmaninoff Rhapsody, Barry's original music for Elise's stage show, two previously unheard arrangements of the Somewhere In Time theme, and more! The exclusive, in depth liner notes are by journalist and author Jon Burlingame and the timeless art design is by Jim Titus.