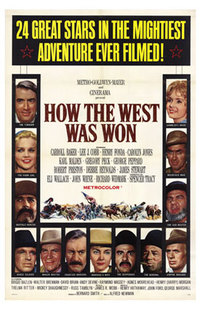 How The West Was Won

Note: This review was originally published on September 14, 2008 and has been updated to include details regarding the Blu-ray release

The box-office smash 1962 film How the West Was Won follows the adventures of the Prescott family and their journeys in the American West, over a time period from 1838 - 1889.  One of the few films shot in the 3-panel "Cinerama" process, How the West Was Won was more about "spectacle" than about story, with extremely wide vistas, and five parts to the stories, filmed by three directors. Starting out with "The Rivers" (directed by Henry Hathaway), the Prescott family, led by patriarch Zebulon Prescott (Karl Malden) are heading west down the Ohio River.  They encounter a beaver trapper named Linus Rawlings (James Stewart), who immediately falls in love with Zeb\'s daughter Eve (Carroll Baker).  But it\'s a short-lived romance, as Linus moves on, but encounters a murderous clan at an isolated trading post where he is nearly killed.  Realizing that the Prescotts are in danger, Linus manages to rescue them from the thieves in the nick of time.  After a tragic accident in river rapids loses some of the Prescott clan, Eve decides she will go no further, and settle down with Linus at the spot where her family members died.

The second part, "The Plains" (directed by Hathaway) follows Eve\'s sister Lily (Debbie Reynolds), who makes it to St. Louis and encounters professional gambler Cleve Van Valen (Gregory Peck).  Informed that she has inherited a gold mine in California, she joins a wagon train to make her way out West, and during the journey she is courted by Van Valen and the wagonmaster (Robert Preston).  Things don\'t turn out as planned, though, and after surviving an attack by Cheyenne Indians and finding out that her gold claim was worthless, Lily ends up marrying Van Valen and settling in San Francisco.  The third part, "The Civil War" (directed by John Ford) features Eve\'s son Zeb (George Peppard) who runs off to join the Union army, which his father Linus has joined.  Realizing war isn\'t quite what he thought it would be, Zeb tries to desert, but ends up saving General Grant (Harry Morgan) and General Sherman (John Wayne) from an impromptu assassination.  When he finally returns home, Zeb finds that both his parents have died (Linus in the war, Eve from heartbreak). He leaves the farm with his brother and decides to head out West for a better life.

In "The Railroad" (directed by George Marshall), Zeb now works as a lieutenant in the U.S. cavalry, trying to maintain a delicate peace between the Indians and the railroad companies, with the help of buffalo hunter Jethro Stuart (Henry Fonda).  As the two companies race to finish the transcontinental railroad, they end up betraying the truce, and the Indians retaliate by forcing a buffalo stampede through the camp, killing many people.  Zeb resigns from the cavalry and decides to continue out west, to Arizona.  The final part of the film, "The Outlaws" (also directed by Hathaway) finds us in San Francisco where Lily (now a widow) sells off her possessions to pay her debts, and heads to Arizona to join Zeb (now a marshal) and his family.  But when he picks Lily up at the train station, Zeb also encounters the outlaw Charlie Gant (Eli Wallach), who threatens Zeb\'s family.  The local marshal won\'t help, so Zeb decides to be proactive and ambush Gant on a train that he believes will be robbed.  It\'s a rather exciting sequence, and a fine way to end the film. (The epilogue showcases the "modern" west, explaining how much it has grown in the 80 years since the Prescotts finished their adventures.)

How the West Was Won has somewhat cookie-cutter characters, but you can still enjoy following them on their journey.  Because of the Cinerama process, everything is more about the visual spectacle and presentation - and oh, what a presentation!  Warner Home Video has released How the West Was Won as a three-disc special edition DVD, also available in a Ultimate Collector\'s Edition, and a two-disc Blu-ray release.  Split out over the first two DVDs, the film benefits from the breathing room to allow for a high bitrate image which looks excellent. Newly remastered from the original 3-strip film, the film has been cleaned up a bit and the "seams" digitally blended to provide a rather stunning and excellent image.  On DVD, it\'s presented in letterboxed (2.59:1) widescreen, and the distortion from the left and right panels can be a bit distracting, especially during shots when the camera moves.  For the most part, however, it\'s an excellent image and colors are saturated and blacks deep and crisp.   The seams become more noticeable when the sky is prominently featured in the shot, since the blue tends to mismatch a bit on the edges.  On Blu-ray, the image is even cleaner and details on the screen are much easier to make out. However, this also draws your eye to the seams a bit more than on the DVD release.  I found that the Blu-ray version is a bit easier to watch than the DVD release, mainly because the image is such a wide one that you get more information out of the resolution.

On DVD, the audio is presented in English and French Dolby Digital 5.1, newly mixed from the original 7-channel Cinerama audio.  It lacks the punch and fidelity of most modern films, but considering this is a 1962 film, it sounds pretty good - and it\'s not a "fake" surround mix, making it even more enjoyable.  It\'s lacking a bit of mid-range, though, and so at times it feels either too muddy or too brash.  Alfred Newman\'s Oscar-nominated score (with Ken Darby) sounds excellent, and the film is presented with an overture, intermission and exit music sequences.  The best sequence by far is the railroad fight, which looks and sounds excellent - definitely show it to people who haven\'t seen anything in Cinerama!  Even better though is the Blu-ray release, which provides a myriad of languages: Dolby Digital English 5.1, French 5.1, German 5.1, Italian 5.1, Castellano 5.1, and Spanish Mono.  Not to be outdone, the subtitle options include a staggering 15 languages, including Finnish, Swedish and Chinese!  The highlight of the Blu-ray audio is, of course, the 5.1 Dolby TrueHD track.  It adds just a bit more clarity in the high and low ends, but the midrange is still lacking.

Extras on both the DVD and Blu-ray releases include the theatrical trailer (in Standard Definition), which looks terrible because it hasn\'t been restored. So it\'s a great companion piece to show just how good the new transfer of the film is!  An in-depth commentary track features documentarian David Strohmaier, Cinerama Inc. director John Sittig, film historian Rudy Behlmer, film music historian Jon Burlingame, and stuntman Loren James.  It\'s a fascinating discussion about the history of Cinerama, the challenges faced with filming a narrative epic story in the complicated process, and much more.  Burlingame\'s focus is, of course, Alfred Newman\'s excellent score, and Loren James gives some great insight into the on-set tenor of the film shoot.

The third DVD disc contains Strohmaier\'s 96-minute long documentary, Cinerama Adventure.  This is also included on the Blu-ray disc, in Standard Definition.  This insightful and in-depth look at the history of the Cinerama process starts with its early days as a military training tool, and how it probably helped spawn the widescreen craze of the 1950s, and possibly saved the film industry.  Towards the end of the documentary they touch up on How the West Was Won, and also talk with stuntman Bob Morgan who was almost killed when a stunt went wrong in the train fight sequence.

The Ultimate Collector\'s edition comes with 10 color lobby cards from the film\'s original promotional materials, as well as 10 black-and-white behind-the-scenes photographs.  Also included are replicas of the original souvenir book, and the press release book.  The Blu-ray release comes in the new "Digi Book" packaging, and includes a 42-page color book that gives a bit of production notes and artwork, behind-the-scenes photos and costume sketches.  It\'s missing the souvenirs mentioned above, but it\'s not billed as an "Ultimate Collector\'s" edition Blu-ray, after all.  Exclusive to the Blu-ray release, however, is a "Smilebox" version of the film.  On a second Blu-ray disc, the entire film is presented in with a simulated curved screen - the letterboxing is actually curved to give the appearance of the screen wrapping around your head.  Obviously this is best experienced on a large screen, so take it to your friend\'s kickin\' projection home theater if you don\'t have one yourself.  It\'s not as wide an image (cropped on the sides a tad), and it\'s actually easier to watch this version of the film - the distortion is still present, but less distracting.  Language options are all the same, but there is no commentary track or extras included on this disc.

How the West Was Won is a classic American western.  It might not have deep characters, but it does present the challenges faces by people exploring that new frontier in an entertaining and immersive manner.  What it lacks in depth it makes up for in scope. It\'s best seen on as big a television as you can find; the new transfer is excellent and I would strongly recommend you check this one out, even as rental.