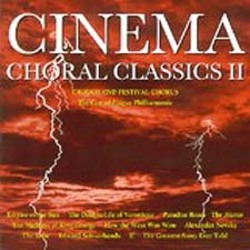 by David A. Koran September 21, 1998
4 / 5 Stars
This second collection of choral based movie music excerpts follows in the line of the original, released earlier in 1997. However, unlike the movie industry, the sequel is actually better than the first. This album has a more liberal dose of Patrick Doyle's work for many of the Kenneth Branagh produced films, such as Much Ado About Nothing and Hamlet. We also get a liberal dose of Basil Poledouris, especially the, yet unreleased except on a promotional album, theme to the 1996 Summer Olympic Games.

Most of the content on the album is paced differently than the originals that you can find many of the original soundtracks. I believe most are faster that what was intended by the original composer. Actually this makes some pieces sound better, such as Alfred Newman's How The West Was Won , and an almost perfect rendition of Danny Elfman's Edward Scissorhands. Also, some classics, not originally written for the screen, such as pieces by Handel and Dvorak, appear on this album in adapted form from when they were placed to accompany such films as Paradise Road and If.