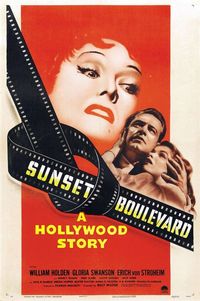 One of the best films that Hollywood made about Hollywood is Sunset Boulevard.  Billy Wilder\'s classic 1950 film is about struggling screenwriter Joe Gillis (William Holden) and his ultimately fatal experience with crazy faded silent movie diva Norma Desmond (Gloria Swanson) who has a dream of staging a comeback with her revival of Salome.  A cynical look at the motion picture industry, Sunset Boulevard is filled with drama, black humor and some immensely quotable lines ("I am big - it\'s the pictures that got small!").  It features excellent performances by Holden and Swanson, as well as Erich von Stroheim and Nancy Olson in supporting roles.  Cameos by some Hollywood legends, including Buster Keaton and Cecil B. DeMille among others, helps imbue the film with a major sense of authenticity - including the fact that Paramount Pictures had such trust in Wilder that they allowed him feature the studio within the film.

Driven by Gillis\' narration, the film is a slice of 1949\'s Los Angeles, with a slice of noir, further accentuated by Franz Waxman\'s Oscar-winning score.  Sunset Boulevard would go on to be nominated for eleven Academy Awards (winning three), and has been selected for preservation by the National Film Registry.  Previously released on DVD in 2002 with a handful of special features, the film is now available as part of a new "Centennial Collection" series from Paramount Home Video, to celebrate the studio\'s 100th anniversary.  This two disc set sports a transfer from a HD master, as well as some new extras on top of the previously available ones.

The transfer of the film actually looks just about as good as the previous one, making me wonder if they had done the HD mastering back in 2002.  Back then, it looked excellent, with the B&W image feeling crisp and sharp, with almost no dirt or gate weave.  This "new" standard definition image feels the same way, with strong contrast providing an effective rendition of John F. Seitz\'s Oscar-nominated cinematography and lighting.  With the other extras moved to the second disc, the bitrate is a bit higher than the 2002 release, and it\'s a fine looking image.  Audio is presented in English, French and Spanish Dolby Digital Mono, and sounds fine for a film that is nearly 60 years old. It\'s not going to impress your friends, but it\'s such a great film that it doesn\'t matter.

The first disc contains the film, as well as the 2002 commentary track hosted by Billy Wilder historian Ed Sikov. It\'s a very informative and well presented track, with a host of details on the making of the film as well as anecdotes from Wilder\'s Hollywood.  Well worth listening to.  The only other extra on the disc is a trailer for a colorized (yikes!) version of It\'s a Wonderful Life.  Random!

The second disc contains the wealth of supplemental material.  "Sunset Boulevard: The Beginning" (23-minutes) takes a look at the genesis of the project, mixing interviews with cast and crew members, film historians and a rather large spattering of behind-the-scenes photographs.  It\'s a great piece.  "The Noir Side of Sunset Boulevard by Joseph Wambaugh" (14-minutes) features the acclaimed crime novelist analyzing the film through his detective\'s eyes, pointing out the symbolism and how the film fits (and at times doesn\'t fit) the formula of what "noir" is.  "Sunset Boulevard Becomes a Classic" (14.5-minutes) is a retrospective look at the reaction that Hollywood had to a film that took a caustic look at itself.  Critics, filmmakers, historians and even Glenn Close (who portrayed Norma Desmond in the musical version of the film on Broadway) chime in, providing some interesting context to the film\'s ultimate success as one of the best films ever made.  Finally, the last item on the first menu screen is "Two Sides of Ms. Swanson" (10.5-minutes), a look at the classic silver screen actress through her granddaughter, and through Airport 1975 co-star Linda Hamilton.  We find out that Swanson isn\'t quite like Norma Desmond - they have as many differences as they do commonalities.

The next menu page brings us "Stories of Sunset Boulevard" (11-minutes), with cast, crew and film historians discussing the various challenges that Wilder and his team faced while making the movie, including a discussion about the failed original "morgue" opening sequence.  "Mad About the Boy: A Portrait of William Holden" (11-minutes) is a quick look back at the film career that Holden had, and how he established himself in Hollywood.  "Recording Sunset Boulevard" (6-minutes) is a look at Franz Waxman\'s award-winning music from the film. Varese Sarabande producer Robert Townson is featured here, as well as film historian Andrew Sarris, and Townson discusses the impact that Waxman\'s score had - as well as the efforts Townson took to re-record the score for a proper soundtrack release, and restore the lengthy cue that Waxman wrote for the ultimately discarded opening scene.  "The City of Sunset Boulevard" (5.5-minutes) explores the various Los Angeles locations that the film took place in, and the history of those spots.

Repurposed from the 2002 release, "Morgue Prologue Script Pages" lets you read through two different versions of the deleted prologue, with the ability to view uncut footage from the scenes. It\'s interesting to read, but also reinforces the belief that this particular prologue was too goofy to remain in the film. The 2002 "Franz Waxman and the Music of Sunset Boulevard" (14.5-minutes) features Waxman\'s son John discussing his father and his working approach to the film.  "Beyond the Gates: The Lot" (5-minutes) is a fast but punchy history of Paramount Pictures hosted by producer A.C. Lyles and film historian Rudy Belmar.  I would love to see a longer expansive version of this at some point. It\'s also the only featurette in 16x9 widescreen.  From the 2002 disc again, "Hollywood Location Map" features an interactive map that leads to some footage/voiceovers to talk about the different locations that appear in the film.

"Edith Head: The Paramount Years" (13.5-minutes) was also on the 2002 release of the film, and is a nice biographical look at the work of Oscar-winning costume designer Edith Head.  "Paramount in the \'50s" (9.5-minutes) is a look at the rather impressive array of films that the studio released in that pivotal decade when television started to erode at the audience base.  Finally, the "Original Theatrical Trailer" is included, as well as three different "Galleries" ("Production", "The Movie", "Publicity").

Sunset Boulevard is a classic Hollywood film in pretty much every possible way.  Its excellent story, marvelous acting, engaging musical score, and impressive visual style hold up even today.  This new "Centennial Collection" edition brings us nearly two more hours of supplements over the previous release, and is absolutely worth picking up.  The only caveat is that the studio is likely to release a Blu-ray version in 2009.  But until then, this is the penultimate edition of the film to own.