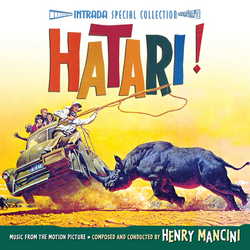 Along with Breakfast At Tiffany's, The Pink Panther and Charade, Hatari! is generally regarded as one of Henry Mancini's all-time most popular film score recordings. In fact, Hatari! ushered in the legendary "Baby Elephant Walk," a swaggering tune for clarinet with orchestra written for the movie that instantly became a wildly popular hit on its own. In addition to their lofty commercial success, another thing these albums had in common was in how they represented their respective scores. In each case, Mancini re-recorded roughly a half hour of music, adapting the major themes and easy listening-style music into albums accessible to wide audiences. The actual film soundtracks, including the more dramatic underscoring, were never made available. With this premiere release of the film soundtrack to Hatari!, Intrada presents to new audiences the complete score as Mancini actually recorded it for the film, including the original version of "Baby Elephant Walk," heard both in its familiar setting for the parade of elephants scene and in dramatic variations for the final chase sequence.

Hatari! was recorded on stereo three-track 35mm magnetic film in 1962, the majority of which were transferred by Paramount onto 2'' archival tape in the 1990s. To present the complete score, restoration engineer Chris Malone has added otherwise unavailable cues from several additional sources.