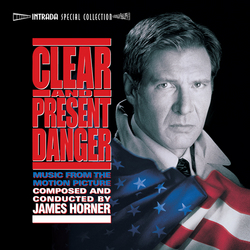 James Horner'’s score for Clear and Present Danger (1994) begins with a burst of martial percussion and rising figures for horn and trumpet, ushering in a stirring patriotic theme that ebbs and flows through dense, rolling harmonies. Time and again, the melody returns to its center, steadfast and self-possessed. This is a story, the music says, of fundamental nobility; a story of the courage and honor that dwells in the heart of a true patriot; a story, in other words, of Jack Ryan. Then the music begins to subtly darken—a reminder that nobility is forged in adversity.

Horner's ability to blend classical symphonic traditions with modern electronics resonates with both the Cold War milieu and technological sophistication of Tom Clancy’'s novels. Horner can hone in on a story’'s emotional center— no matter how twisted the plot—and provide a major asset for stories that are filled with conspiracies and intrigues.

James Horner fashioned one of his longest film scores for Clear and Present Danger. Although he would typically include the majority of a score'’s important cues on his soundtrack albums, for this one he selected just over half of the music recorded for the picture. Interestingly, many of the cues for the last section of the movie (after “Second Hand Copter”) were absent. Consequently, all of those sequences that found Jack Ryan (Harrison Ford) pressed into action in Colombia, battling drug lords bent on death and destruction, are premiering on this 2-CD set. Paramount Pictures provided Intrada with access to the scoring session masters, recorded and mixed digitally.