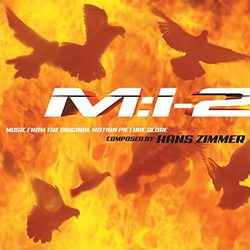 Performed by
The Mission Impossible 2 'Band'

How does one spell disappointment? M:I-2. While the trailers looked great—and I'm a huge John Woo fan—I have to say that I was pretty disappointed by Mission Impossible 2. Not because of the action sequences, or even the acting (though it wasn't anything great). I was disappointed because I thought the screenplay was just as bad as the first film (both were written by Robert Towne), and as a fan of the television show, I had to wonder why the idea of the team and covert operations went out the window in favor of a one-man (Tom Cruise) army blowing things up left and right in plain sight. More "James Bond" than "Mission: Impossible," the film left a few things to be desired. One of those elements was the score, by veteran composer Hans Zimmer.

When I heard that Zimmer was going to be scoring the film, I was nothing short of enthused. Sure, I thought Danny Elfman did a great job with the first film, but this was a different film, and a different composer's style could lend a fresh take on the classic Lalo Shifrin theme. Even Alan Silvestri did a great job with his rendition of the M:I theme, heard in the trailers for the first film. I knew that Zimmer had worked with Woo before (Broken Arrow) and I was sure that if they could do for M:I-2 what they had done on Broken Arrow, it would definitely be a fun score.

But as it happened, Zimmer had a very busy year. He worked on The Road to El Dorado for DreamWorks, and it tanked. But he did a lot of work on the songs and score, and that takes time and energy. He also worked on Gladiator for Ridley Scott, with Lisa Gerrard. With over two hours of music, the score was no doubt something that took a while to do. So what happened with M:I-2? Did Zimmer bite off more than he could chew? Possibly. But without talking to him, we might never know. In any case, the quality of work seemed to drop from those two previous films, to

First off, he assembled the "Band" together—a group of eleven players that performed the bulk of the score. One name that stuck out was Lisa Gerrard. I guess Zimmer had a great time working with her on Gladiator that he asked her to stay on for M:I-2. While I have no problem with Gerrard's work, I just felt that in the film it stuck out a bit too much as Gladiator-like, since that film was still pretty fresh in many moviegoer's minds.

"Hijack" begins with a bass and percussion riff slightly reminiscent of how the first M:I film opened. But then it goes in a completely different direction—while it is more of a jamming session than anything else, there is a definitely thematic line to the music. The themes heard in this cue pop up again throughout the score.

"Seville" contains the other end of the thematic spectrum—a flamenco dance. With a great Spanish guitar theme (which also will pop up multiple times in the score), these are the moments that I love about Zimmer—a great simple theme with a light airy freshness about it. I suppose these are the traits that explain why his scores to As Good As It Gets and Rain Man get the nominations, and others like Backdraft don't. Towards the end of the cue, Gerrard's vocal styling shows up, and it starts to sound like Gladiator. Uh oh.

The cue for "Nyah" presented on the album is the film version—Heitor Pereira does exceptional work on the guitar, and the theme is happy, but reminds me a bit too much of the happy moments of The Rock. But quickly it pops back into the "Seville" theme, and it's all good again. One of the more disappointing cues on the album, "Mission: Impossible Theme" is a mere 40 seconds long, and sounds like a high-school battle of the bands grunge session thrown together—except that they can keep the beat. I was hoping for an opening title sequence that put the first film's opening titles to shame, and instead we get a rock-climbing session (more on that later) followed by this brief "montage" at the end of the credits.

"The Heist" isn't anything great, just some smooth jamming. "Ambrose" brings in a bit of the Zimmer stylings that we would come to expect. A dark theme (which shows up time and again), and a Russian male choir (ala The Peacemaker) help sell the idea that Ambrose (Dougray Scott) is the bad guy. "Bio-Techno" is the raucous "music" heard during the fight sequence in the laboratory. I didn't think that this was a very listenable track—it's got some good percussion, but a lot of intentional noise distortion and effects, which I don't find that all exciting. In the film it works pretty well, but only because the sound of the gunshots tend to drown out any additional music that they tossed in there. What is good about the track, though, is that through all of the noise you can hear small pieces of the other themes from the score.

"Injection" is a rather dramatic cue, which works great for the first minute—until Gerrard brings us back to Gladiator. Thankfully, that only lasts for about 30 seconds or so, and then we're back to the sad, tragic theme for Nyah—which works exceptionally well at pulling heartstrings and (if you actually believe the storyline) is a rather romantic cue. This does rank up there as one of my favorite cues from the album, but it's the next cue "Bare Island" that's my favorite.

As I have repeatedly said in the past, I'm a sucker for choral music. So it was with great joy and pleasure that I heard "Bare Island". In an almost Carmina Burana sort of way, the choir pounds you over the head to start, and then goes quiet and builds softly heading towards a climax. What's the climax, why a great rock version of the M:I theme, of course! In a way, this is what the opening titles should have been. This also heralds the beginning of the motorcycle chase, and just before the 4-minute mark, the rhythm of the cue changes into something I swear I heard in Con Air, but with Ambrose's theme.

"The Bait" is a cue that appears much earlier in the film, but brings back Lalo's theme as we are introduced to "the team"—only two people this time, beyond Ethan Hunt (Cruise). Why so few people? I distinctly recall the television show having upwards of six or seven people at a time (in addition to the "regulars"). Even the first film had more people (before they killed them all off at the beginning)!

"Mano a Mano" brings in the tragic theme heard in "Injection" interspersed throughout some percussive sequences as Ambrose and Hunt duke it out. "Mission: Accomplished" brings us back to that happy theme I swear I heard in The Rock. "Nyah and Ethan" is an incredibly slow rendition of "Nyah" heard on the original soundtrack album (with all of those songs), and that brings me to by next major problem with this soundtrack.

The second track on this album is a song by Zap Mama, "Iko-Iko". It is a song heard during the opening title sequence as Hunt is rock climbing. The first soundtrack album released (the "pop" album) didn't have this song present on it. Except for some international versions of the album, the song doesn't appear anywhere except this score album. Why then would they put a version of the song that doesn't appear in the film? This "dance mix" version seems so out of place that I would have just avoided its inclusion to begin with. The other problem is "Nyah". A really enjoyable version appears on the pop album—but they present a different version on the score album. Why not include both on the score album? Sure "Nyah and Ethan" is a slower version of the "Nyah" that appears on the pop album, but most people aren't going to buy both albums.

Overall, there are a few cues on this album that are quite enjoyable. But the bulk of it isn't anything special. I suppose with such a disappointing film, I was hoping for the score to be better—but Zimmer has been so busy lately that it's understandable that something has to slip somewhere. It's just too bad that it was here. The album runs about 45 minutes, and is worth checking out only for a few tracks—so use your own discretion.