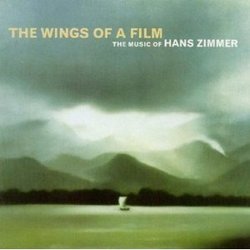 The Wings of a Film - The Music of Hans Zimmer

Review: The Wings of a Film

Last year at the Flanders International Film Festival, Hans Zimmer performed in his first public concert ever featuring his film works. The concert featured music from such hits as Backdraft, Gladiator, The Thin Red Line, Mission: Impossible 2, Crimson Tide, The Lion King, and more. The resulting CD release, "The Wings of a Film" covers only some of the concert; many of the cues were deemed by Zimmer to be lacking in quality and not worth putting on the album. Nonetheless, the resulting album is a mixed bag of Zimmer score moments.

Two cues from Gladiator top out the album, and of course Lisa Gerrard was on hand to provide her vocals. She comes across as crisp and clear, and the performance by the orchestra is quite good. Driving Miss Daisy, one of my favorite Hans Zimmer scores, is also performed, and the orchestra really gets into the jazzy bits, and with Eddy Vanoosthuyse on lead clarinet and Zimmer himself on piano, it's a really great cue.

For Thelma & Louise (as well as Driving Miss Daisy), guitarist Pete Haycock plays the same part in "Thunderbird" that he played on the film. It's a good performance, but it leads up to the next cue, which is still one of Zimmer's most powerful cues in the concert: The Thin Red Line. "Journey to the Line" was used in the Pearl Harbor trailer, and Zimmer says, "Jerry Bruckheimer did more for The Thin Red Line than Fox publicity ever could have done". He's right, of course, and the long cue is just fascinating to listen to.

More Zimmer collaborators show up on stage including Heitor Pereira performing on Mission: Impossible 2, and Lebo M & Keswa performing a few cues from The Lion King (supposedly) and The Power of One. I say "supposedly" because while these cues feel like they might have come from The Lion King, they certainly were not in that form in the film. It's more of a freeform version of some African singing, with bits that sounded like The Lion King. The performances of Nine Months and True Romance are okay, and Rain Man isn't too bad either - but they aren't the shiniest apples in the bushel.

As this was a live concert, there is applause between every music cue. But while a lot of care was done to remove the audience noises during the performances, during some of the quieter moments (especially in Gladiator), you can still hear the shuffling, coughing, and other human noises that you generally don't want to hear during a performance. The liner notes contain insight into Hans Zimmer's music by the directors he has worked with, and even allow Zimmer a little soapbox to give his thoughts on the concert. Overall this is a satisfying album, but while I was thrilled with some of the performance, a few others left something to be desired.