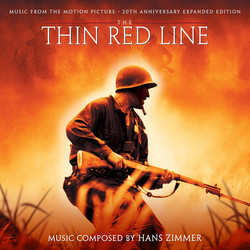 La-La Land Records, Fox Music, 20th Century Fox and Sony Music proudly present the 4 CD expanded and remastered reissue of renowned composer Hans Zimmer's masterful original motion picture score to the 1998 epic WWII drama, The Thin Red Line, starring Sean Penn, Adrien Brody and Woody Harrelson, and written and directed by Terrence Malick. Having been present at the film's scoring sessions, Reissue Album Producer for 20th Century Fox, Nick Redman, describes composer Zimmer's score as, "…a gorgeous tapestry unfurling before us, shimmering majestically in the air… There were many moments where the score moved one to tears: the juxtaposition of music with image was so affecting." Finally, this powerful and important score has been given a deluxe treatment worthy of its breadth and scope in a new presentation that is greatly expanded beyond its initial soundtrack release - with a bounty of never-before-released material. Discs 1&2 present the film score as written in chronological film order (Disc 2 also contains additional alternates), while Disc 3 features the remastered original 1999 soundtrack album and Disc 4 contains RCA's album of Melanesian chants from the film. Produced by Neil S. Bulk and Mike Matessino, and mastered by Daniel Hersch, this special release, approved by the composer and Alan Meyerson (scoring mixer) features a 36-page booklet with a note from album producer Nick Redman and exclusive in-depth liners by writer Jeff Bond, including new comments from Zimmer. The elegant art design is by Dan Goldwasser.