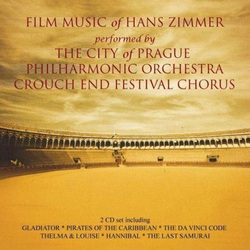 In their ongoing series of 2 CD sets featuring re-recorded highlights from major film composers both living and dead, Silva Screen finally worked their way into Hans Zimmer\'s career of music for film.  A situation such as this can end being double the controversy for many fans, as there are some who have never been satisfied with the performances presented by James Fitzpatrick and his team at Silva and there are many more who find the entire idea of collecting highlights of Zimmer\'s compositions a laughable endeavor.  First off, Silva Screen\'s recordings with the Prague Philharmonic have advanced considerably from when they began in the early 90\'s, at which time pacing and performance were called out as sloppy, until in recent years when I found a number of their attempts on par or exceeding the original versions.  Their work on John Barry\'s The Last Valley and Raise the Titanic, as well as sharp, energetic playing on Goldsmith\'s Under Fire and The Boys from Brazil suites, were all quite impressive.  And as for Zimmer, the debate among fans and critics alike will seemingly never end, insightful comments emerging from both camps, but as anyone can read in recent reviews, his music for both Pirates of the Caribbean sequels really won me over and I decided to give his work my unbiased attention.

This set includes suites and themes stretching back from Rain Man in 1988, up to the very recent The Da Vinci Code and Batman Begins.  The liner notes state that the recording team was striving for a more concert hall presentation and less of the sound and texture of the film recordings.  This meant adjusting orchestration and not beefing up the orchestra with any overdubs.  This often results in smaller scale representations of the music, sometimes lacking the over-the-top bravado and operatic nature of the originals.  And in cases such The Rock, I felt it was about on par with hearing a military or college marching  band perform the material – not always bad, still energetic, but certainly different than its filmic counterpart.

The selections from Gladiator, The Thin Red Line, The Da Vinci Code and Pearl Harbor are the standouts here, all quite solid.  I had forgotten how awfully dated both Rain Man and Days of Thunder now sound, even in this current interpretation.  I know Zimmer\'s background is in producing pop albums, but something like Thunder is best left off future compilations as it doesn\'t real sell his talent very well.  On the other hand, the versions of "Kyrie for the Magdalene" by Richard Harvey and "Vide Cor Meum" (heard in both Ridley Scott films, Hannibal and Kingdom of Heaven) by Patrick Cassidy are wonderful, but their inclusion does seem at odds with what is supposed to be a title focused on the music of Hans Zimmer.  Admittedly, they are gorgeous pieces and the liner notes describe these as bearing the "stamp" of Zimmer, but this does bring about the old argument of his particular style of composing, or more specifically, his work ethic of having other composers contribute music to the films for which he is hired to score.  This has bothered me in the past but there are two things I came to realize which gave me pause: it has given a number of talented individuals the chance to shine on major projects, which in turn lead to their own solo careers (i.e. Harry Gregson-Williams), but also that this collaborative atmosphere is found most often in pop & rock music, Zimmer\'s background and a situation when all members of a band can contribute something musically to either a single song or their own song to a band\'s album.

As I noted, however, the debate rages on, even within myself as I usually tend to still favor the traditional school of composition, where a single individual is responsible for the music written for a film.  Regardless, I think Zimmer\'s range is captured here enthusiastically if not always in memorable fashion.  There is more diversity here than found in Zimmer\'s own "Wings of a Film" collection and the two recent albums focusing on his music for British and American films, respectively.  However, much of the power and strength evident in the film recordings could not and were not duplicated here, so be warned "The Kraken" may not completely blow your socks off as it does on the official Dead Man\'s Chest album!