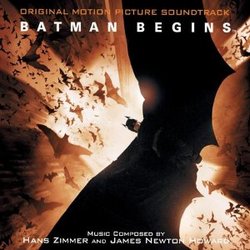 I've been hearing a lot of whining about this score. Hundreds upon hundreds of fanboys are out there right now crying in the dark. Most of them feel robbed. Robbed of their precious superhero themes, robbed of their fanfare action music, and once again - robbed of Danny Elfman. Batman Begins is a "reboot" of the Batman franchise. Director Christopher Nolan has pulled the character out of the gothic/art-deco worlds seen in the previous films and put him in a world grounded in reality (real enough to make it believeable anyhow). Instead of treating the character as a work of graphic fiction or fantasy, Nolan wanted to explore the psyche of a man who is twisted enough to dress like a bat and prey on criminals. Everything about this film is different from past bat-incarnations. So, why would the music be the same?

Danny Elfman's score for Batman is the first score I ever owned, and to this day it is still one of the finest in my ridiculously large collection of film music. Elfman's style, along with Steve Bartek's majestic orchestrations, changed the way a comic book movie sounded. The score was dark, gothic, heroic and one could sing the theme out loud after the first listen. Elfman's score fit the film exceptionally. When Tim Burton didn't come back to direct Batman Forever in 1995, Elfman followed. Elliot Goldenthal took over composer duties for director Joel Schumacher. Even though Goldenthal crafted new themes and his score was a bit on the "brassy" side, the sound was still very much in the "dark superhero" fashion that Elfman established. Let's just say that John Q. filmgoer didn't notice a change in the music.

The music in Batman Begins sounds nothing like the previous scores. Much like Chris Nolan, Hans Zimmer and James Newton Howard strived to create something different. There are themes interwoven throughout the score, but it may take some a few listens before the themes sink in. The score is in the vein of Zimmer's Black Rain, The Peacemaker, The Thin Red Line, Hannibal, and The Ring. Portions that are unmistakably James Newton Howard resemble his music from Snow Falling on Cedars and The Village. If you can imagine all those scores blended together, you will have an idea of the sonic scope of Batman Begins. Make no mistake about it; this is a Hans Zimmer score - with special guest composer James Newton Howard. It isn't 100% clear how much of Howard's music makes his way into the mix (I would say 70% Zimmer, 30% Howard) but the majority of the music is bathed in that Zimmer "Media Ventures" style. Hans Zimmer/Media Ventures haters should probably skip this album.

In an attempt to be clever, all the tracks titles on this disc are Latin names for various species of bats. The album opens with "Vespertilio"- a very percussive piece that utilizes rhythmic pounds that simulate a giant bat flapping its wings. These bat-flaps are reoccurring throughout the CD. Midway into this cue, a rising and descending two-note brass chord is also heard. This is a central theme and is most powerfully orchestrated at the 4 minute mark in "Barbastella."

For the most part, it is easy to identify which composers' influences are heard. The tender and emotional moments in "Eptesicus," "Barbastella," "Macrotus," and "Corynorhinus" are undoubtedly JNH. While the dramatic string and brass material reflects Zimmer's The Thin Red Line (2 minutes into "Eptesicus"). Before working together, HZ and JNH would always talk about what it would sound like if one of them would start writing a cue and the other would finish it. In "Macrotus," they finally got their chance. The cue opens with some JNH strings much like his style in Snow Falling on Cedars. Around the 1:30 mark, the strings swell and Zimmer takes over with a grand crescendo. Zimmer and Howard are my two favorite composers so this track is a real treat for me.

A central theme of the film is fear. "Artibeus" and "Tadarida" contain moments that sound as though they belong in a horror film- perfect to reflect the theme of fear. Whispers and dark ambient textures are heard as sudden frantic high pitched strings come into play to give audiences an extra jump. These moments of terror are matched against The Scarecrow's evil doings in the film.

Action music junkies may be a little disappointed in this album. Yes, there is action but it is few and far between and nowhere near as adventurous as Danny Elfman's Batman. "Myotis" is the first track to introduce action which is very much in the vein of the action material in Zimmer's The Last Samurai. Batman's main theme is also heard for the first time in this track. The action returns in "Antrozous" which is basically a carbon copy of Zimmer's Black Rain action motif. Sure Zimmer rips himself off, but it works! Hands down, the best action cue on the disc is "Molossus." Once this track starts, it never quits. The main theme blazes in all its glory and the Black Rain material also sieges its way into the mix. If you like Zimmer's action music in The Peacemaker, you're gonna love this! Fun to listen to while going out for a morning run, let me tell you.

As an album, the score makes an enjoyable listen, but it is no where near as fun as Danny Elfman's score for Batman '89. But this album's strength doesn't rely on fun factor or the amount of action material, instead it relies on the psychological aspects of the story and, being a Batman fan ever since I was seven, I absolutely love that about this score. More important than the album, the score works marvelously within the context of the movie. HZ and JNH really understood the overall vision of the film because the music compliments the visuals flawlessly.