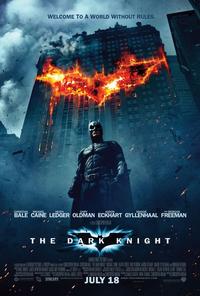 Back in 2005, director Christopher Nolan (Memento, Insomnia) brought us a rather unique and dark re-imagining of the \"Batman\" story. Until his film, most people\'s film experiences of Batman had come from Tim Burton and Joel Schumaker\'s versions in the 1990s, and the brightly kitsch-filled Adam West feature film based on the 1960s television show. Nolan\'s Batman Begins brought us an emotionally scarred Bruce Wayne (Christian Bale), his trusting and reliable butler Alfred (Michael Caine), his assistant DA girlfriend Rachel Dawes (Katie Holmes), upright police sergeant Jim Gordon (Gary Oldman) and Wayne Enterprises inventor Lucius Fox (Morgan Freeman), all working in various ways against a city that is run by the mob, full of corruption, and general bitterness and malaise. As Batman, Wayne takes vigilantism to the next level, and creating a psychologically bleak superhero who skirts the line between good and bad. This line is explored even further in the new highly anticipated sequel, The Dark Knight.

While there are some in Gotham City who think that Batman is a force of good, many - including higher-ups at City Hall - see him as a vigilante out of control. When The Joker (Heath Ledger) offers the mob (led by Sal Maroni, played by Eric Roberts) his services to get rid of Batman, they balk at him - but soon they realize they just might need his services after all, no matter how unconventional they might be. Meanwhile, Rachel (now played by Maggie Gyllenhaal) is now seeing Gotham district attorney Harvey Dent (Aaron Eckhart), and is caught between her love for him, and her friendship with ex-boyfriend Bruce Wayne (and the knowledge that he is Batman). As Gotham City endures a series of attacks by The Joker, the issue becomes whether Batman can save the city by taking out the Joker and his gang of criminals - or by succumbing to his demand that he reveal his identity. Can Bruce Wayne balance his dual identities, even if it means putting those he loves most at risk? It\'s a question that was posed in the first film, but taken to a whole new level in The Dark Knight.

As played by Ledger, The Joker is an unrelenting and unforgiving entity. He is, as Nolan has stated, a \"constant\" - he has no character arc, and his malicious and sadistic personality allows everyone else in the film to react to him, and that is where their character arcs are borne out of. The Joker sees himself as Batman\'s opposite - an agent of chaos where Batman tries to bring order. Ledger gives a phenomenal performance, one that will last with you for weeks after you see the film (especially the \"disappearing pen trick\"!). Similarly, Eckhart as Harvey Dent has to give a sympathetic portrayal of a character insistent on doing what is right, even at the expense of his own safety. But Dent\'s fate will take him on a darker path, one that he is not prepared for. Rachel Dawes has more depth in this film as well, as she tries to reconcile her feelings for Bruce, and her feelings for Dent. Bale does a solid job as Batman again, and shows that not only is he not an invincible superhero, but he\'s also as flawed as the people he\'s trying to combat.

Speaking of combat, the action sequences in the film - starting with the bank robbery at the beginning and going all the way through to the end - are excellent. It\'s a major step up from the convoluted and hard-to-follow action from the first film, and I\'m glad that Nolan calmed down enough to allow the scenes choreography to be showcased nicely. There\'s a lot of action amidst the drama, and audiences will not be disappointed. Visual effects are solid, and the music score by Hans Zimmer and James Newton Howard builds on the palette created in the first film, and takes it up to the next level. While it still doesn\'t have the balls-out theme that some people want (in fact, it doesn\'t even use the big theme heard briefly in the first film), it still works effectively to get your heart pumping and to add an extra emotional layer to Harvey Dent\'s dramatic turn of events. The motif that Zimmer came up with for the Joker is such a memorable use of sound design and instrument recording and manipulation that it becomes instantly identifiable with only one note.

The best way to see The Dark Knight, if you\'re fortunate, is on the IMAX screen. It\'s not just your \'typical\' IMAX DRM upconversion; rather, they actually shot a few sequences on IMAX film, in the full glory of the format. So while you\'re watching the film, it will shift from the widescreen format to suddenly filling the entire square screen, throwing you right into the the scene. It\'s not distracting at all; in fact it\'s just mindblowing at how good the image looks. If you don\'t see it in IMAX, you\'re not missing any extra information, it just changes how you view the film, and it makes it more of a real-world experience than anything else. Incidentally, the dark Gotham City shown in the first film, with the steam and bridges and monorail, seems to be missing most of those traits, and while it might just feel like the Chicago locations that they filmed at, it\'s actually more effective to make the film feel like it could be happening in our real-world. And that\'s one of the best parts about The Dark Knight - it\'s not a fantasy comic book movie. It\'s a movie that is plausible and realistic. From the action to the dramatic situations, nothing seems overdone or out of place.

When leaving the theater, I commented to my guest \"Well, the summer\'s over!\". It\'s not entirely true, and there are other movies coming out in the next few weeks that I am looking forward to. But it\'s hard to see how any of them could be on the same level as The Dark Knight. It\'s a movie that just succeeds on every possible level - it is the movie of the summer (if not the year), and I can\'t recommend it enough.