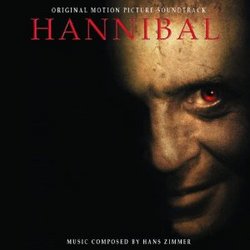 Performed by
The Lyndhurst Orchestra

Goodie goodie! Hannibal, the highly anticipated film adaptation of Thomas Harris' sequel to Silence of the Lambs, hits theaters this Friday. But is it all it's cracked up to be? That depends. The book had many problems, mostly stemming from plot issues. As the film accurately mirrors the book (except for the very end), these issues remain on the screen, and detract from what otherwise would have been a very good sequel. With Jodie Foster opting not to return to her award-winning role as FBI Agent Clarice Starling and director Jonathan Demme decided not to direct, the only returning cast members are Frankie Faison as Barney the Orderly (also the only person to be in all three Hannibal Lecter films) and Anthony Hopkins as the Dr. Hannibal "The Cannibal" Lecter. Visionary director Ridley Scott (Blade Runner, Alien, Gladiator) took the directing helm, and dragged his recent collaborator Hans Zimmer with him.

Zimmer's score is a combination of classically-influenced pieces mixed with atmospheric and subdued cues. "Dear Clarice" features a large string section with no brass and an emphasis on piano and boys choir. Featuring a slow somber motif that slowly builds but never climaxes, this cue runs a hearty six minutes long—but don't worry, it has dialogue to break up the pace. Glenn Gould's wonderfully performed "Aria da capo" from the Goldberg Variations, BWV 988 (J.S. Bach) is included (as a source cue from the film) which blends into the atmospheric wind of "The Capponi Library". More sound design than music, it's used for effect, and doesn't really add too much to the album.

"Gourmet Valse Tartare" was written by Klaus Badelt (not Hans Zimmer) for the film, and begins with a slightly skewed interpretation of the "Blue Danube Waltz." This works well in the film, and as the cue progresses, it gets darker and darker until we realize that the orchestra has been mixed in with some sneaky synth enhancements, drawing the cue down into dark madness. My favorite cue on the album, "Avarice," comes at a time in the film where the tension has been building for probably a good ten minutes, only to have the bomb drop: at which point the cue reaches its emotional climax. I won't give you details, but let's just say that the motif Zimmer wrote (which shows up in "Dear Clarice" as well as elsewhere in the album) is the closest thing to Howard Shore that the film was going to get. It's enough of a nod to The Silence of the Lambs that I literally got chills when the music showed up in the scene. (Unfortunately, it was one of only two times I got chills, compared with the dozens of times from Silence.)

"Firenze Di Notte" is not written by Zimmer either, but it is a rather percussive cue with lots of synth effects (again, almost tantamount to sound design) and is used to underscore one of the tense action sequences in the film. The soft choir in "Virtue" is another classically inspired piece of writing, as is "The Burning Heart." "Let My Home Be My Gallows" contains a mix of classical and atmospheric elements, and is covered with a little dialogue from the film. There are a few Goldenthal-esque elements in this score, and the cue ends on a tragic note (as it does in the film as well). "To Every Captive Soul" is from the finale of the film, and allows Zimmer to leave us with a classical touch of music. It's moving, but seems to share the problem of the film: they both lack a true emotional soul. Where The Silence of the Lambs was psychologically stirring and powerful, Hannibal seems to be for the most[] part a "by-the-numbers" deal. It's serviceable, but it just doesn't compare to the better film. Ultimately, the same goes for the score. There is no real grounding in emotion here, and while I enjoyed the music, it just didn't grab me like Howard Shore's score did for Silence. The album ends with Patrick Cassidy's original composition "Vide Cor Meum," which shows up as the opera in the film. As before, it's another example of the classics permeating the sound in the film.

Why the album producers and Decca chose to include dialogue is a mystery to me. Granted, the monologue choices are (for the most part) well chosen, but to put them on top of music was (in my book) a big no-no. Take a lesson from Rykodisc and Silva: if you are going to make the mistake of including dialogue from a film, at the very least put it on it's own track, so we can skip it. At least the dialogue isn't as badly mixed as the second Gladiator album is, but that is for another review. Hannibal has a few noteworthy moments in the film, and a few noteworthy moments in the score. The classically inspired bits are the best, but the atmospheric cues could have been traded for isolated dialogue cues.