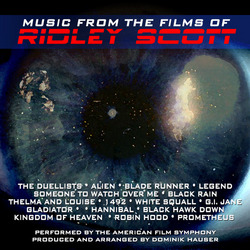 Music From the Films of Ridley Scott

BuySoundtrax Records is proud to announce the release of Music From the Films of Ridley Scott. The recording was produced and arranged by Dominik Hauser, performed by the American Film Symphony, and features performances by Brandon K. Verrett and Edgar Rothermich.

Ridley Scott has produced some of the most critically acclaimed, commercial successes, and beloved films of the past 35 years. From his 1979 breakthrough, Alien, to the cult classic Blade Runner, to his three Academy Award nominations (Thelma & Louise, Gladiator, Black Hawk Down), Scott's films have run the gamut, set in the past, present and future.

One thing is constant in the works of Ridley Scott—he has worked with some of the best-loved composers of his time, including Jerry Goldsmith, Hans Zimmer, Vangelis, Trevor Jones, and more recently Harry Gregson-Williams and Marc Streitenfeld.

This release is a limited pressing of 1,000 units.