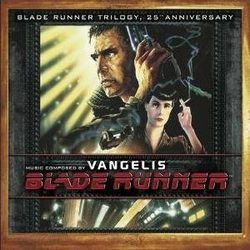 I have to admit, yes, I'm a fan of Blade Runner, always have been, always will be. When I first heard that the "Final Cut" was to be released in 2007, I felt that would finally get something I had been waiting for since 1992—a pristine, no holds barred, end-all-be-all final unambiguous cut of my second favorite film (David Lean's Lawrence of Arabia> is #1). Shortly before hearing a final date for the DVD, I heard we were also supposed to get a 3 CD package of Vangelis' groundbreaking score—with "extra music." I think my heart skipped a beat when I first read that, because, my sad little secret was out—I'm a "completist."

For years, fans of Vangelis' work on the film had to deal with a re-recording by The New American Orchestra (which actually sported film composer Tom Scott on the album) due to a number of issues that can only be guessed at. Some time in 1994, we were graced with re-envisioning by Vangelis, albeit with dialogue, of some of his original music. Before that time, a "definitive" bootleg cropped up from a shady source known as "Off World Music" (get it?), which had none of the dialogue and a large amount of music from Vangelis and pieces of source music. The quality was something to be desired, but it satiated fans' quest for the music for some time. After that 1994 official re-mastering by Vangelis, some other versions of bootlegs started showing up, most famously the "Gongo" release and the "Esper Edition". Both of which either built on the OWM bootleg or worked towards the soundscape idea (the "Deck Definitive Edition" being one of my personal favorites), but nothing was "everything." And for ten years, fans were left with sub-par digital transfers or the effects and music tracks from various sources, and still hunting for the Holy Grail.

So, 2007 arrives, the CD package is announced, and fans are at the ready. We see that, unfortunately, we get a re-re-mastered 1994 version of the Atlantic release, and, wait for it... that bonus CD of unreleased goodies. But the third CD in the package had me puzzled. The description on most sites that sold the CD said "..(t)here are some intriguing spoken word contributions too." What?! Wait, was this supposed to be a soundtrack or one of those audiobook things, what about the "music?" Yes, everybody, we have a miscarriage of CD production, a release that neither satisfies fans nor interests newcomers. If I, or anybody, wanted commentary or dialogue with my music, I'd opt for one of the five (yes, five) versions of the DVD package that were released and listen to the isolated tracks there. If I wanted a soundtrack, and paying the $30 for 25-year-old music, I would strictly want the music, which, sadly wasn't worth the money spent. Vangelis' new music left me flat, and the second CD of unreleased music was uninteresting, and, well, would have done better as a fully sequenced 2 CD set much like the bootlegs attempted to do (soundscape or otherwise).

The first CD in the set is the same 1994 album you can pick up for $12.99 or less at Wal-Mart or Amazon. Unless you have golden ears, or super cochlear implants, you'll not notice a real lick of difference. Next up is that extra special bonus CD of unreleased music, out of sequence and out of place. I think it was ill-conceived, and was a bit of a rushed effort, even if the production involved a master of the sequencer, close friend of Vangelis, and musician in his own right, Frederick Rousseau. No matter how I try to let the pieces stay separate from their "compadres" on the first CD, I just feel that if they were sequenced in film order (with dialogue excised), the two CDs would have made a better listening experience. This is not to say that Vangelis' music is anything less than excellent. Remember that this was written in 1981 and 1982, with Vangelis coming off his high from Chariots of Fire, and most of the popular, let alone film music, was struggling from the previous decade of the 1970s. Yes, both Jerry Goldsmith and John Williams broke new ground scoring science fiction with Alien and Star Wars respectively, but Vangelis was the first to apply the sequencer filled soundscape to the genre. In fact, both Chariots of Fire and Blade Runner brought the genre of New Age music to popular attention, and where would Yanni, John Tesh, Loreena McKennitt and Enya be without it? However, the one, and I do mean the one and only bright point to this second disc is the last track, "Fading Away" which underscores one of the best monologues ever given on any film in history by Rutger Hauer as his character, Roy Batty dies. There's a similar track on the first CD, "Tears in Rain," which, mistakenly for many years, was the end-all reference for that piece of music, but this unadulterated version proves to be much better and with more emotional punch.

So, although the only CD that is pure music in the package leaves the listener wanting more, but feeling quite uninspired, we've been given a third CD that is even less special. The tracks are overrun with more useless SFX and dialogue in an effort to milk the mental movie generated from the first two CDs in the package. Since the deluxe DVD set of the film glossed over much of Vangelis' contribution in the documentary Dangerous Days, I would have preferred an interview disc with Vangelis himself. The "modernization" of pieces and samples from his work on the films' score seems overly forced, and the same types of people who feel George Lucas should have left the original Star Wars trilogy untouched will likely grind their teeth in the same way when hearing this. It even has less liner notes than some of the bootleg editions, how does that happen?!

Being that this remains an "incomplete" work, in my opinion, you can now find some of the source music in digital form that had been missing. The "Blimpvert" music, from the album Japan - Traditional Vocal and Instrumental Music, and "Bicycle Riders" from Gail Laughton's Harps of the Ancient Temples is now obtainable on CD, just search Amazon. It's probably the most interesting addition the legacy of Blade Runner for these two pieces, given that much of the time; source music is overlooked, and not considered the score. In these two cases, the whole pieces are very unique (as are the albums themselves) and interesting to listen to. One could wonder what was going through Vangelis and the music supervisor's head as they came across these original 'acoustic' pieces to accompany the synthesized futuristic score. Too bad they didn't spend the time to help round things out, even if they went through the effort of expanding something that was already available. If you're heart is set on acquiring this package, there's probably nothing my review that could dissuade you. However, if you're patient or feel like you want to be a stickler and protest, keep to that 1994 release and a trip to Wal-Mart or Amazon.