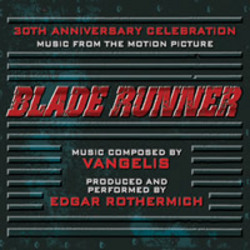 Over the years, multiple edits of the film have been created for the home video, DVD and Blu-Ray markets. Similarly, Vangelis' score has been released in several different incarnations, but none of them are accurate representations of what was heard in the original 1982 film. "Largely because of a dispute between Vangelis and Scott over the director's use of his music in the film, a proper soundtrack of the music as it is heard in the film has never been commercially issued (despite the promise of a soundtrack album from Polydor Records given in the film's end titles)," described Randall D. Larson in the liner notes of the new BUYSOUNDTRAX recording.

BUYSOUNDTRAX Records seeks to correct this oversight, with a new recording faithfully recreating the original music from the film, which proved to be a difficult task. Vangelis' score was composed entirely by performing on keyboards and recording it directly, so no written transcriptions exist. Composer Edgar Rothermich was charged with reverse engineering the score—listening to the original music and a 1982 album mock-up and transcribing it by ear. He also had to recreate the sound of 1982 synthesizers and decipher if noise heard was due to recording on tape or stylistic choices by the composer.

"Blade Runner is the most difficult kind of score to deconstruct," said BSX producer Ford A. Thaxton. "Symphonic music can usually be determined because the instrumental palette is known. But the 1970s-era electronic technology and the improvisational style in which Vangelis created the score made it especially difficult. But we feel Edgar's made a very close replication of what the score sounded like in the film. He's true to the sound [of] the original but he's brought it into today's world."

"The objective from the very beginning was to be as close as possible to the original score as heard in the film," Rothermich said. "It was never a case of my interpreting the soundtrack. It was essentially a re-recording of the soundtrack music."

Blade Runner: Music from the Motion Picture – A 30th Anniversary Celebration has been mastered by James Nelson at Digital Outland and includes exclusive liner notes written by Randall Larson, detailing the process of creating this new recording.

Blade Runner: Music from the Motion Picture – A 30th Anniversary Celebration is limited to 1500 units.