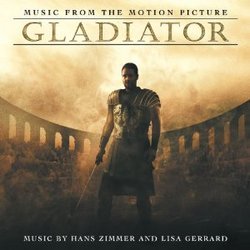 Director Ridley Scott has always been known for making somewhat "visionary" films. From Blade Runner and Alien to 1492: Conquest of Paradise and Legend - he has always had a unique vision of the story, and has always expertly realized that vision on the screen. While some of the films he's made haven't been exactly critical or box-office successes, there is little doubt that he commands a talent for the craft of filmmaking. His recent film venture revisits the "sword and sandals" genre of film with Gladiator. While early rumors during production hinted that Scott might re-team with composer Vangelis, it was later announced that he would actually re-team with Hans Zimmer. The resulting score that Zimmer created, in collaboration with Lisa Gerrard, is a rather powerful one that hints strongly of Holst and Wagner, while at the same time keeping the same "feeling" that is present in many of Zimmer's action scores.

The story loosely parallels The Fall of the Roman Empire - Emperor Marcus Aurelius (Richard Harris) is dying, and wants to leave the Empire to his best general, Maximus (Russell Crowe). However, Marcus' slightly power-hungry son Commodus (Joaquin Phoenix) has other plans. He kills Marcus, and proclaims himself to be Caesar. He has Maximus enslaved, and kills his wife and son. (That's a rather simplified recounting of the events...) Maximus is picked out by Proximo (Oliver Reed) to be trained as a gladiator - and it is there that Maximus begins to plot his revenge.

The score that Hans Zimmer wrote is rather detailed - lots of action cues that are heavy on the brass, and are plainly inspired by the works of Holst and Wagner. But there are plenty of softer dramatic cues. This is where Lisa Gerrard clearly applied her talents. Her vocalizing in cues such as "Sorrow", "The Might of Rome" and "Now We Are Free" is really enjoyable, and her talents are obvious from these cues. But I did have to wonder about the "Now We Are Free" cue - it didn't really fit into the film, and reminded me just a tad of "Cirque du Soleil"! But it's still enjoyable to listen to.

For me, the best track on the album is "The Battle". Not only does it contain very strong action cues, but the various moments of brass fanfares and "Roman"-esque music* are powerful and memorable. I think that my love for this cue probably stems from its excellent use in the trailer for the film. As it appears in the movie, this cue worked really well, but the moments of heroic fanfare were drowned out by the sound effects. It also seemed at times that these moments didn't match any of the action on screen. It's as if Zimmer was working musically on a certain form, and the film was on another level - they almost matched, but not quite. I think these parts of the score work better on the album than in the film.

The dramatic choral music (again evoking Wagner) at 4:50 in "Am I Not Merciful" appears twice in the film - once with choral, and once without choral. The first time (without choral) happens when Maximus reveals himself to Commodus, and lays out the plans for his revenge. This cue was on the advance CD of the soundtrack (which contained 3 tracks) but I couldn't find it on this album. Maybe I'm not looking hard enough? The second time the music is used (with choral) is when Commodus proclaims himself to be as a brother to Maximus - just before the climactic fight scene at the end of the film. Both moments in the film are powerful and enhanced by this Wagnerian moment - a perfect use of film scoring.

The album runs about an hour long. It was said that they had recorded approximately 2-hours of music, so there is plenty not presented on the album. But it's a satisfying listen that blends from track to track seamlessly in a manner like a "suite". If you haven't seen Gladiator, go do so. I think you'll find it to be a highly entertaining (although not perfect) film. The score works rather well at times, but the soundtrack is better.

*What is Roman music? We have no recordings from 150 AD, yet we have a preconceived notion of what "sounds" Roman! It is probably because of the older films created back in the 1950s and 60s that set the standard of what sounds Roman. Composers like Dimitri Tiomkin and Miklos Rozsa set the standard, and our comparisons of "Roman" music will probably always be based off of scores like Ben-Hur and The Fall of the Roman Empire.