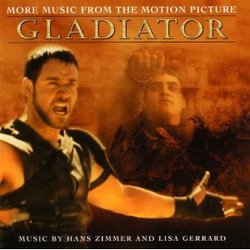 Performed by
The Lyndhurst Orchestra

Gladiator just won a Golden Globe for Best Score, and recently got nominated for an Academy Award for the same category.  While Hans Zimmer freely admits to being influenced by Wagner, his lack of a mention of Holst (and more specifically, "Mars: Bringer of War" from "The Planets") can be a bit frustrating at times.  Enough so that I keep flipping back and forth whether or not it was Zimmer or collaborator Lisa Gerrard who wrote more "original score."  In any case, in what might be an effort to capitalize off of the award season push, Decca Records is releasing a second album of music from the hit film.

It seems to be an interesting trend: a soundtrack is successful, so a few months later they release an album of "more music" from that film. Unfortunately, they always do the same thing: add new "remixes" of some of the more popular tracks, and have a few other tracks of score intermingled with dialogue. This album is no exception.  It starts out with an ethnic-sounding track, "Duduk of the North."  It's a nice ethereal cue didn't make it into the final film.  The end title track from the first album ("Now We Are Free") is next, but with a twist.  This is labeled as "Juna's Mix" (Juba is played by Djimon Hounsou in the film), and features more rhythms and even some African chanting backgrounds.  Uh, okay.

Now we get two tracks ("The Protector of Rome," "Homecoming") that feature more enjoyable music—but this time they are slightly marred by the inclusion of dialogue.  In some cases, mixing dialogue over music works, and in this case, it really doesn't work at all.  In "Homecoming," the dialogue is used from the first confrontation between Commodus and Maximus in the colloseum ("My name is Gladiator..."). It's a powerful dramatic moment in the film, and Zimmer's score work well at underscoring the tension and power ("Father to a murdered son, husband to a murdered wife..."). Unfortunately, the music used here isn't from that scene—and the power of the words get lost in the low guitar work, which doesn't fit at all.

"The General Who Became A Slave," "Rome is the Light," and "Maximus" are noteworthy cues.  The guitar work by Heitor Pereira in "Maximus" is emotional and moving.  While seven of the 18 cues do feature dialogue, the remaining cues that don't aren't that bad.  But they really don't add anything to the first album.  (Unlike The Prince of Egypt, I didn't feel as though I were missing vital cues!)  What it does do, though, is allow us a glimpse inside their working process.  Many of the cues aren't in the final film, and some of them are raw takes.   A very interesting track is "The Gladiator Waltz."  Featuring a snipped of dialogue, but for the most part speech-free, this is Zimmer's original synth demo of the major fight sequence at the beginning of the film.  It's interesting two-fold: for one, we can see how similar and different his mockup is from the final music, and secondly, we can see that Zimmer's synth mockups sound almost as good as the final product. (Guess that approach of sampling an entire orchestra really does pay off!)

The album ends with the "Maximus Mix" version of "Now We Are Free."  Supposedly all the rage in dance clubs in Europe, it's certainly an upbeat way to end the album, but thoughts of Meco and his famous Star Wars quote come to mind: "Then I just got this idea that since everything then was disco, why not be able to dance to Star Wars?" Similarly, do we really need a dance-mix of a Gladiator music cue?  Apparently enough people thought so, and the album ends on this note.

In total, there is really about 40-minutes of music from the film that haven't been released before.  That's good, but most of those cues have some sort of dialogue.  Not so good.  Granted the dialogue doesn't run for very long; it's just ill-placed for the most part. The liner notes feature some very interesting comments by Hans Zimmer, and he even talks (briefly) about the Holst issue. If you have the first Gladiator album, you probably don't need to run out and get this one.  But if you're a die-hard fan, and can overlook the dialogue, then I say go for it!