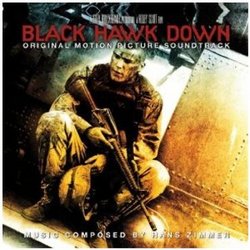 Ridley Scott is going for some sort of record. First it was Gladiator in 2000, Hannibal a scant 8 months later, and now Black Hawk Down 9 months after that.

Focusing on the ambush of U.S. Rangers and Delta Force soldiers in Somalia in 1993, the film is a brutal, honest (albeit shortened) depiction of the incidents that occurred during that ambush. It doesn't seek to explain why it happened, or what could have been done differently. Instead, it just shows it as it is - a brutal firefight.

At face value, that seems like a rather obvious flaw in the film - there is very little time or change to get emotionally attached to the characters, and most of them all look alike anyways. (I had a hard enough time keeping them in order while reading the book, and the film was even worse in that regard.) But it was the raw human aspect of warfare that kept my eyes glued to the screen, as I was emotionally pulled like taffy in almost every direction possible.

Hans Zimmer has now more or less been "stolen" from Ridley's brother, Tony, so it came as no surprise that he provided the score to the film. While the score works incredibly well in the film, supplementing the action and tensions, I found that as a listening experience the album left much to be desired.

There are a few different musical styles on the album. The first type is the more indigenous East African stuff. Zimmer employed famed African singer Baaba Maal to provide the vocals in "Hunger," "Still," and "Of The Earth." Maal's voice does a wonderful job providing emotions to scenes that might otherwise be viewed merely as action-based. "Vale of Plenty" employs an odd mixture of country violins with an ethnic counter-melody (which sounded a bit like his work in Gladiator). Hard rock guitars, percussion and atmospherics overlaid with acoustic African guitars and deep strings provide building tension in "Chant". Heitor Pereira does a routinely excellent job playing the guitar in "Mogadishu Blues," and harsh percussion whips across the stereo sound field with whining instruments in "Synchrotone." It's not terribly pleasant to listen to, but the softer end of the cue, which evokes The Thin Red Line, is more palatable.

"Bakara" is almost like a hip-hop song, and "Tribal War" is a bit heavy on the electronica, although the sampled orchestra does gain momentum in the last half of the cue. Probably the best cue on the album, "Leave No Man Behind" is the most traditional Zimmer-esque cue on the album. With a strong theme (heard in "Synchrotone"), it might bear a strong resemblance to Simon and Garfunkle's song "Scarborough Fair," but it still works really well. "Still Reprise" is a shorter version of the music heard in "Still," and ends the album on a somber note.

There are a few other contributors to the album (beyond those at Media Ventures who helped Zimmer finish the score in a short time period). Algerian rocker Rachid Taha's "Barra Barra" is a hard-hitting number, and Denez Prigent's "Gortoz A Ran - J'Attends" (performed by Prigent with Lisa Gerrard) has a rather soulful Gladiator-esque quality to it. Towards the end of the album, Joe Strummer and The Mescaleros provide a rather moving rock rendition of the traditional Irish tune, "Minstrel Boy." As "supplements," Daniel Schweiger provides insightful liner notes, and Ridley Scott's storyboards fill the pages.

What should be clear is that this is a rather emotional album. But the emotion comes not from the music itself, but rather from the film and the context it lends to the music. As a film score, the music works incredibly well when married to the picture. As a CD listen, it works best only if you have seen the film and can re-envision the images in your head as you play out the album.

Let me end this review by saying that Ridley Scott has almost redeemed himself for Hannibal. Almost.