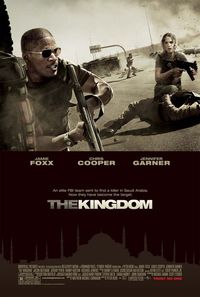 It seems lately that any film involving some aspect of the Middle-East will lean on the side of political correctness, even going so far as to focus more on grievances that small elements in the United States military/government have done, instead of look at the larger issue of militant Islamic terrorism. While some filmmakers would prefer to look at \"root causes\" and blame America first, there are apparently still some filmmakers who would risk offending lefties in Hollywood by unabashedly pointing out the obvious threats in a \"here and now\" situation, instead of grievance mongering. To that end, Peter Berg\'s The Kingdom is probably one of the only films to directly take on the topic of Islamic terrorism with the U.S. not only being the \"good guys\", but also actually winning.

The film focuses on the issues facing a small FBI task force team that goes to Saudi Arabia to investigate a terrorist attack on an American compound. Jamie Foxx plays Ronald Fleury, a FBI investigator who\'s friend was killed in the terrorist attack. Along with him is Grant Sykes (Chris Cooper), Janet Mayes (Jennifer Garner) and Adam Leavitt (Jason Bateman). The first act of the film involves the political issues involved getting the FBI team to Saudi Arabia (\"The Kingdom\"), and then once they\'re there, the problems they face working in an incredibly restrictive environment, and trying to coordinate with the Saudi military, including their liaison, Colonel Faris Al Ghazi (Ashraf Barhom). Cultural differences make things hard, but also the fact that as they\'re trying to piece together who was responsible for the attack, they are now being hunted themselves.

While it might seem like little more than \"CSI: Riyadh\", The Kingdom is produced by Michael Mann, and has his fingerprints all over it: from the moody character moments, to the tense action sequences, all the way to Danny Elfman\'s electronic and guitar-heavy score. From the opening 4-minute title sequence, in which the history of Saudi Arabia, the relationship with the USA, and links to terrorism are addressed, you know that this film isn\'t going to pull the PC angle. It\'s a film about hunting terrorists, and the terrorists are bad. It slows down a bit in the middle, where you would expect an action sequence to take us away from all the investigative stuff, but the end packs quite a punch. In a fall where most of the politically charged movies seem to be about how bad the USA is, it\'s refreshing to see one which shows us who the real enemy is.