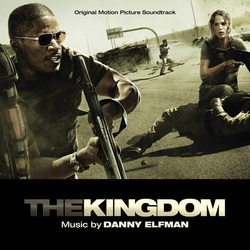 This fall has seen and continues to see an amazing influx of movies dealing with the Iraq War, with the role of the United States in the Persian Gulf region, and with the impact of war on the bodies and psyches of Americans. The movies have ranged from slow, mournful explorations of tragedy and grief to complex thrillers like The Kingdom, but all have been immediate and relevant and interesting. The Kingdom, while receiving mixed reviews from audiences and critics, at least has everyone talking about its mixing of genre, its combination of Saudi/American politics and police procedural, and its emphasis on the price (metaphorically and actually) we ultimately pay for our oil.

Sadly, the same cannot be said its score. Danny Elfman\'s entry in the Middle-East movie lottery is one of his weakest in recent years. Elfman hasn\'t scored an action film outside superhero movies in a few years, and I was interested to see where he would take the material. Elfman has always been a master of sound design and unique timbral combinations. In this way, his work on The Kingdom does not disappoint. Elfman has returned to the mixing board and thrown in every sound possible. The opening cue, "The Kingdom – Titles" gives you a sense of what is to come. It opens with heavily processed sounds that are slowly layered in, each adding their ostinato to the rhythmic pulse. The sounds are so processed that in most cases, I could not identify them even during close listenings. About 45 seconds in, the drum loops kick in followed quickly by crescendoing and decrescendoing strings that seem to arise out of the pounding texture only to be subsumed by them again. If you connect the string lines, you get a semblance of a melody, but there is no harmonic structure to go with it and it fails to stick in the ear.

This layering of pure sound reminds me of Luigi Russolo\'s manifesto on "The Art of Noises" in which he proclaimed almost one hundred years ago that "We must break out of this narrow circle of pure musical sounds, and conquer the infinite variety of noise-sounds." Elfman has conquered precisely that territory in The Kingdom; melody hardly matters and form is nothing more than linear succession of barely related sounds. As an audience member you listen for the interplay of these sounds and let Elfman\'s skill at handling them wash over you.

While most of the score is taken up with tracks employing this procedure, Elfman counterpoints those cues with ones that feature droning washes of harmony supporting a simple electric guitar melody. The sound is surprisingly similar to Eric Clapton\'s work fifteen years ago for Rush. There is a quiet beauty in "Waiting," "Friendship," and particularly in the full treatment Elfman gives in "Finale," but I\'m most struck by the way he handles the guitar melody not as melody, but as another sound to be manipulated. He never develops the theme in the ways we expect from his earlier work. Instead Elfman lengthens it, turns the movement of notes around, but does not fundamentally alter its texture, timbre, or style. Once you\'ve heard the sound on "Waiting," you know what to expect from the other cues.

Overall, listening to The Kingdom I felt as though Elfman were trying out new ideas having not fully digested them. It is as though he is a child on Christmas morning, delighting in new presents, but not exactly sure where they will go in his room come that evening. One of Elfman\'s hallmarks as a composer has always been matching sound to image and this direction for action scoring has definite potential, it just hasn\'t been realized in this Kingdom.