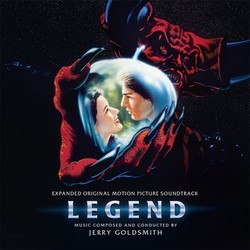 Performed by the National Philharmonic Orchestra with a large choir and a broad mix of spellbinding electronic textures, Goldsmith's score features enchanting songs, a wide-ranging blend of melodies from the romantic themes for Tom Cruise's and Mia Sara's characters to motifs for goblins, unicorns, faeries and elves, and a brooding melody for Tim Curry's imposing character of Darkness. Ranging from evocative impressionism to grand, operatic statements, the score marked the apotheosis of Jerry Goldsmith's symphonic impressionism of the early 1980s and the composer himself ranked it as his finest work for many years.

This release features the slightly expanded film score on disc 1 and the original soundtrack album on disc 2. This new 2CD edition adds for the first time two previously unreleased cues and two alternate tracks. The sound has been entirely restored and carefully remastered by audio engineer Christophe Hénault. The CD comes with a 16-page booklet with liner notes by Jeff Bond, discussing the film and the score including new comments by engineer Mike-Ross Trevor on his collaboration with Jerry Goldsmith. The release is limited to 2500 units.