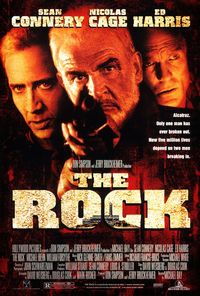 Michael Bay\'s second feature film, The Rock, is probably his best. Coming after the success of Bad Boys but before the ADD-affected editing trend that would plague Armageddon, The Rock gave Bay a chance to tell an exciting story with some great action set-pieces, through the unlikely pairing of Nicholas Cage and Sean Connery. A team of rogue Special Forces led by Brigadier General Hummel (Ed Harris) steals VX nerve gas rockets and take over the island of Alcatraz and threaten the population of San Francisco, their demands being that the families of men killed during secret black ops missions get the same compensation as the regular military families. In response, FBI biochemist Stanley Goodspeed (Nicholas Cage) is brought in to disarm the rockets with the help of the Navy SEALs infiltration team - but to get into "The Rock", they need one more person - the only man who has successfully escaped from Alcatraz, former convicted British spy John Mason (Sean Connery). Produced by Don Simpson and Jerry Bruckheimer, the film is a nearly non-stop rollercoaster ride of action and thrills, with a refreshing emphasis on character and storyline.

Recently released on Blu-ray, The Rock has been given a very solid visual transfer, at crisp 1080p/AVC encoding. Known for using filters and making things very visual, Bay\'s film pops off the screen, with deeply saturated colors, natural skin tones and a crisp image, The Rock has really never looked better. There is a bit of grain present in many shots, but that\'s just the nature of film, and it still looks great.

The audio for the film is presented in English, French and Spanish Dolby Digital, as well as PCM 5.1 English. The Oscar-nominated sound mix sounds excellent and it\'s a fully dynamic mix that takes advantage of the surrounds, creating a truly immersive soundscape. Hans Zimmer, Nick Glennie-Smith and Harry Gregson-Williams did the music on the film, and oddly it sounds a little flat, coming mainly just out of the front left and right speakers. Otherwise, this mix is definitely one to showcase and works as nice demo material.

Impressively, most of the supplements for the Blu-ray release have come from the 2-disc Criterion Collection DVD. The feature commentary by Michael Bay, Jerry Bruckheimer, ex-Navy SEAL Harry Humphries, Ed Harris and Nicholas Cage is included, and is a great behind-the-scenes exploration of how the film got made. The remaining supplements all came from the DVD as well, including the very amusing "Outtakes", a video interview with producer Jerry Bruckheimer, a look at the dive-sequence visual effects by vfx supervisor Hoyt Yeatman, a "Movie Magic" episode on the special effects, two featurettes on Navy SEAL techniques and the "do\'s and don\'ts" of Hollywood gunplay, scenes from the world premiere of The Rock at Alcatraz, and an excerpt from a documentary Secrets of Alcatraz. All of these extras are shown in standard definition, including the Theatrical Teaser, Trailer and TV spots. It\'s a shame, since a HD version of the theatrical trailers would have been great to have.

Missing from the release is the archive of storyboards, production design drawings and production stills - something that would have been a very nice inclusion especially if re-done in HD like the Close Encounters of the Third Kind Blu-ray release. No new supplements were made for this release, which is also too bad because it might have been nice to get something looking back at the film and how it has held up over the past 12 years since it was released, how it influenced other films, and stuff like that. Of course, it would have been especially nice if they had an interview with the composers, letting them talk about how this score has affected their respective career (it certainly helped boost Harry Gregson-Williams into the spotlight).

While The Rock might not have gotten the full-on HD supplement treatment, the extras are still very solid, and with a great transfer and sound mix, the Blu-ray release is highly recommended. And with most of the Criterion extras ported over, it becomes a no-brainer, especially when the Blu-ray costs less than the DVD counterpart.