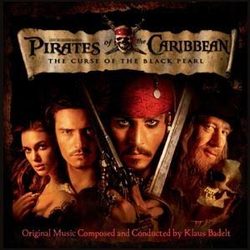 Pirates of the Caribbean: The Curse of the Black Pearl

Review: Pirates of the Caribbean: The Curse of the Black Pearl

As my last review was of Harry Gregson-Williams's Sinbad score, I have found it useful to compare the two scores (and the movies they accompany) in understanding Klaus Badelt's effort with Pirates of the Caribbean.  Sinbad was an animated feature from Dreamworks, the company that brought us Shrek and The Road to Eldorado.  Both movie and score cheerfully embraced genre clichés, turning them around in a playfully engaging manner.  Pirates was produced by Jerry Bruckheimer, a man who from Days of Thunder to Armageddon has shown us how to be overly earnest in silly situations.  Fortunately for the movie, Johnny Depp and Geoffrey Rush delight in Pirate's silliness, hamming it up to create a pleasant summer diversion.  Unfortunately for the movie, Badelt embraces pseudo-earnestness in a score that sizzles with clever moments and plays well in the movie, but sounds slightly overdone outside of that context.

That Pirate's sound owes much to Hans Zimmer's Gladiator score of a few years back is not surprising as it was (in the words of the liner notes) "overproduced" by the Media Ventures composer.  The score opens with its best theme (who every said anything about saving the best for last?), a Celtic-inspired cello solo in 6/8 time.  The theme zips along, carrying you into the action for around thirty seconds before moving into the plodding orchestral/synth sound Badelt employed in last year's K-19.  The first cue flows into the second, "The Medallion Calls," in which the movie's main theme enters.  While it is grand, heroic, bland, and exactly what we have come to expect from Media Ventures composers, this theme has inherent possibilities.  In later cues they come to fruition as the main them is tweaked through development once freed of its initial, stately, 3/4 presentation.  At the cue's end comes one of those clever moments I alluded to as a short, off-kilter little dance rounds things off.

I am aware from the preceding paragraphs you might have the impression I was underwhelmed by this score and movie.  On the contrary, I found both quite entertaining.  I believe my problem with the score and the criticisms above stem from its mixing.  For example, in "Swords Crossed," as Jack Sparrow and young Will spar, there are intriguing little snatches of fiddle playing and vocalizing that tantalized my ears, making me want to hear more.  Yet those parts are covered up by the drums and orchestral hits.  I know the reasons behind the mixing were to craft a more exciting fight sequence, but in a movie with so much tongue-in-cheek, I wonder how the action would have played if the background had been allowed to bleed through, allowing the music's character to be as off-kilter as the actors'.

The score's stand-out track is "Blood Ritual."  It opens with a lovely, mood-setting chorale of melancholic strings and grumbling bass choir.  As the main theme grows out of this foundation, it is recast in a 6/8 time felt in duple.  The theme therefore inherits a lift, a bit of pirate swagger that works perfectly.  Also added, as Will is attempting to rescue his beloved Elizabeth, is a slight bit of dissonance to sustained notes.  This type of spice, from the lilt to the dissonance, seasons the score in ways too often missing.

Pirates of the Caribbean is over the top in both movie and score, yet in a good-natured way.  Badelt's work here is pleasing without being too heavy and is fully melded with the onscreen action.  Yet with the glimpses offered in the cello solo and the occasional pirate swagger added to the main theme, I am curious as to how the composer might sound without Zimmer's overproduction.  I wonder if Badelt might captain his own ship a little differently.