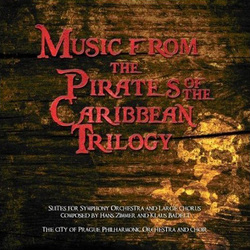 Music from The Pirates of the Caribbean Trilogy

Performed by
The City of Prague Philharmonic Orchestra and Choir

Review: Music from The Pirates of the Caribbean Trilogy

This was quick. Even before the DVD to At World\'s End is out, this compilation of the Pirates of the Caribbean series has been released by Silva Records featuring their usual partners in crime, the City of Prague Philharmonic Orchestra & Choir. Since Hans Zimmer wrote the themes for all three movies, it makes sense that a focused album of suites would be an interesting listen.

The music of the series has been called everything along the lines of "McMusic" to "the best thing Hans Zimmer has done in years." Interestingly, both are right. Don\'t forget, the series started as an ill-fated theme park spin off. Who gives Johnny Depp an action franchise to star in, seriously?! I do find the main Pirates theme enjoyably rousing but it is very plastic and disposable. Once the movie became a phenomena did the series garnered serious musical attention and with Dead Man\'s Chest and At World\'s End, we got an assortment of really interesting themes (the revisedJack Sparrow cello theme, the melancholy Will/Elizabeth love theme, the rousing Pirates Brethren theme). In the final film, Zimmer finally showed off what he and his crew can do and uses a full orchestra. All past joking aside, it is a powerhouse of a score.

This gives The Prague Philharmonic a lot to chew on and while they are using a much smaller orchestra than The Hollywood Studio Symphony, they capture a lot of magic with impassioned performances. There\'s less of the uniform evenness from the Zimmer-produced recordings as the individual Prague musicians here have more European character and nuance. This is particularly in the Black Pearl highlights as the original film music used plenty of synth accompaniment. While they can\'t recreate the large chorus of the film, it is nice to be able to hear them clearly here ("What Shall We Die For") and when they can\'t recreate the amp sound of the "Kraken", their solution is creative.

There are some heavy drawbacks.  Some of my favorite tracks from At World\'s End ("Up Is Down", "I Don\'t Think Now is The Best Time") are ambitiously staged but they are undone by poor mixing. With fewer instruments, they have to be extra careful how to record the separate sections. The percussion section is horribly recorded and mixed too loud (it ruins the last sections of "The Kraken" and "Jack Sparrow") while their very strong brass and string sections are way too low. This key mistake betrays the very thing they were trying to avoid: sounding small. Likewise, the accordion in "Drink Up Me Hearties" sounds stiff.

Overall, it is an enjoyable release. The selections are all well chosen and represent the series appropriately. Compilation albums of modern series are rare and when orchestras like this take big risks, I happy applaud their efforts.