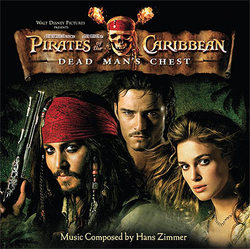 To begin, I have to say that Pirates of the Caribbean: Dead Man\'s Chest was a very difficult album to review. There are 51-minutes of score on the album, used to represent a film that is over two and a half hours long. Therefore, the following discussion is relating to the album compilation, as the thematic composition of the full film score is likely quite different. Secondly, The Curse of the Black Pearl score was itself controversial, though successful, and makes the sequel highly anticipated to see which direction it takes. Many diehard film score fans hated the use of synthesized score while most fans of the film can hum every note of the score.

What Dead Man\'s Chest is not is a set of rehashed themes from Black Pearl. On the other hand, it is a sequel and has enough reprises of the original themes to satisfy the fans. In fact, the less frequent themes were even more enjoyable when they were performed because I was hoping they would show up. Zimmer introduces a number of new themes, which dominate the score. I am not comparing this franchise, but the progression of the score between the first and the second film is more like The Empire Strikes Back than The Two Towers. Lord of the Rings was a planned trilogy and Howard Shore knew exactly how his massive arsenal of themes would unfold across the three films. For Star Wars, Empire Strikes Back used the main themes from A New Hope, but the dominant theme was the Imperial March, with reprisals of the first set of themes. Dead Man\'s Chest, at least on the album, is most like the latter example.

So what made the final album cut? "Jack Sparrow" opens the disc with Zimmer\'s new Jack theme, which is based on thematic ideas from Black Pearl, but reflects Jack\'s quirky nature with a waltz beat. Halfway through, the fast cello theme that opened the first soundtrack comes in an extended and more drawn out form. On the soundtrack, at least, this is the most developed of the original themes and comes back a few times, including a full orchestral treatment at the end of "Hello Beastie" to conclude the score portion of the album. This first cue features Martin Tillman on the cello and it is a highly varied performance that ranges between quirky, dark, and action-paced.

Other original themes are reprised, but not as often as many fans might have hoped. However, it is very likely that they are featured more prominently in the film, but did not make the album cut, since we already have them on CD. One thing to note, however, is that these reprises sound much better than the original form because Zimmer had the time for this film to record the score with a full orchestra; the quality of this soundtrack is a great improvement on Black Pearl. That leads me to the next point: critics of the original score for using electronics in a pirate film will not be placated by this new addition. "The Kraken" features some harsh electric guitar and synthesized percussion beats that effectively create a dark action cue, but may not be what some were hoping for. On the flip side of things, a very Zimmer-esque instrument appears in "Tia Dalma", which is a Gladiator-sounding acoustic guitar, as well as female vocals.

Another new theme is introduced in this second cue, which is performed by the organ. A third new theme comes in "Davy Jones", which is, of course, his theme. It is played by a music box, oddly enough, which is yet another new sound for the franchise. The organ then picks up the theme. While the organ and general tone of the cue is very different for the composer, the theme is very much Zimmer. The brass picks up the theme before the music box quietly ends the cue. The next track, however, sails into more familiar territory, featuring the original Jack Sparrow theme (you know, when he sails the sinking boat into Port Royal...), but his new theme ends the track. "Wheel of Fortune" also features some of the original action themes and will be appreciated by fans of the first score.

The 10+ minute finale cue, "Hello Beastie", is the exact opposite of what I expected from the album, but it is the best part of the score. We still get reprises of the original themes, but the tone of the cue is completely different from anything we\'ve heard for the franchise. It is in more of a King Arthur style, with a dash of The Da Vinci Code. It is slow with a strong choir and brass presence that shows a more serious approach, at least to part of the film, than in the first. This cue makes this a Zimmer score. In addition, the composer(s) had more time than for the first and this cue shows the benefit of that.

I should just mention that the last cue is a disappointing end to the album. The remix uses little from Pirates except an almost unrecognizable beat based on one of the themes. I\'ve never really understood the purpose of the whole remix thing and it really annoys me that this was included and wasted 7 minutes of what could have been more score featured. But forgetting the remix cue, Zimmer\'s score is not as in-your-face with the themes as the first score.

Zimmer\'s style has changed a bit since 2003 (and yes, he had a big hand in the original Pirates score), with scores like King Arthur and The Da Vinci Code developing this slower, dramatic sound, which I feel is a great addition to the soundscape of the Pirates franchise. However, he does close the album nicely with the reprise of the upbeat Pirates theme. This score fits a darker style film and also incorporates a number of different styles, like waltzes, while reprising the old themes a good amount. I think it might be poorly received at first, but will grow on people.

I will say again that this is a difficult score to review. There are a lot of themes, both old and new, to pick out and interpret, but with nearly 2/3 of the score missing from the soundtrack, it\'s hard to know what is actually going on, thematically. However, the album does a good job showcasing the new themes and merely reprising the old ones. I think this was the right approach and makes the album more valuable than one that merely restated all the original themes.