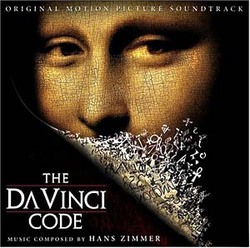 I was not sure what to expect from Hans Zimmer\'s score to The Da Vinci Code, nor was I sure what to make of it upon my first listen. To begin with, the score, as a whole, is tragically beautiful, which is not something that is normally heard from Zimmer\'s music. Hannibal had a classical feel to it, while some of Zimmer\'s less-known scores, such as The Pledge and Invincible (co-composed with Klaus Badelt) had a dramatic, string-driven style. The Da Vinci Code has similarities, but I also see a shift in Zimmer\'s style. There are some electronic elements here, but very little stands out. There is less thematic development than usual for Zimmer, but this score is more atmospheric in function.

There are similarities to recent Zimmer scores, namely Batman Begins. I have noted a moving eighth note motif that has been appearing in a number of Zimmer\'s works (see review for The Island), which is used here in the opening cue, "Dies Mercurii I Martius", and "Chevaliers de Sangreal" in a very similar way as Batman Begins. This is not a prominent motif in this score, but I like its use to add a sense of motion to the music. A second common staple for Zimmer\'s scores is the use of cellist Martin Tillman, joined here by Gregson-Williams\' usual suspect, Hugh Marsh, on electric violin in the opening cue and "Rose of Arimathea". Tillman\'s performance is mostly with an acoustic cello, but is featured prominently.

The string\'s are given a heavy treatment, as Zimmer has done in some of his more dramatic scores, but it Zimmer\'s use of the choir that is a step above anything he\'s done before. It is along the lines of Debney\'s Passion of the Christ and Gregson-Williams\' Kingdom of Heaven, and was conducted by Nick Glennie-Smith. The album ends with a choral piece, "Kyrie for the Magdalene", written by Richard Harvey, which is a very beautiful song and greatly adds to the tone of the score.

Much of the score has a tense, low string-dominated feel, like the cue from Gladiator, "Patricide". Oddly enough, despite the lack of a prominent main theme, the score remains very cohesive due to the consistent tone. The dark mood is only broken a few times by a solo piano. While there is very little brass presence here, after the brief appearance in the opening cue, Zimmer finally brings in the French horns in the final score track, "Chevaliers de Sangreal", which is in 6/8. This cue combines the horns with the powerful strings, the eighth note motif, and the choir to create a truly astounding piece. This cue is uplifting in the same way as "Resurrection" from The Passion of the Christ and is the single best cue of the year. Given the way this score turned out and Zimmer and director Ron Howard\'s past work together on Backdraft, I am greatly looking forward to The Da Vinci Code, despite having found the book mediocre.