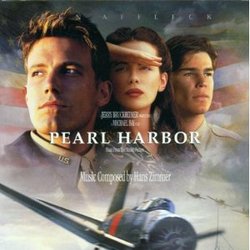 It was a day that would live in infamy. I don't refer to December 7, 1941; rather I refer to May 22, 2001. That was the day I had the "pleasure" of seeing what will most likely be the top summer film, Pearl Harbor. Focusing on a love triangle (and I mean really really focusing) between two best-friend pilots (Ben Affleck and Josh Hartnett) and a nurse (Kate Beckinsale) set against the backdrop of the Japanese attack of Pearl Harbor, the film suffered from a few ailments. First of all, the 3-hour film is just too long; the story it was telling needed at most about 2-hours. The storyline and characters are cookie-cutter cliches, and never really have any true character growth. Even the dialogue seemed unoriginal and forced. Those criticisms aside, the film did manage to provide a rather interesting recreation of the attack on Pearl Harbor, even if it massaged history just a tad.

The score, provided by Hans Zimmer (and five other people, based on the CD's liner notes) is a whole other can of worms. Consisting primarily of two major "love" themes, both are played out with strings and piano, and while effective in creating an emotion, the score (as heard in the film) suffers from repetitive-stress syndrome. By the time the second hour rolled around, anytime something "dramatic" appeared on screen, the music would come flowing forth—it got to be quite annoying after a while. Thematically, the main romantic cues owe much to Ennio Morricone and John Barry, but still retain the Zimmer sensibility of pushing just the right buttons to be effective.

On the album, the first few cues ("Tennessee," "Brothers," "And Then I Kissed Him," and "I Will Come Back") all sound alike—more romance; more light drama. Occasionally accentuated with a female soloist or a soft choir, you can already get a sense of the repetitiveness of the score. Now imagine how it works in the film, where they pad out over 2 hours of this stuff! The score finally gets a bit more interesting with "Attack," where percussion and heavy string octaves signify the Japanese preparing to attack. Dramatic choral and orchestra hint at something dramatic happening (well, 3,000 people were being killed—I suppose that's cause for drama!), but the music then goes back into the same dramatic romance stuff we've heard before.

"December 7th" is another dramatic cue, with plenty of descending and ascending strings (which reminded me a tad of Braveheart and Backdraft). But the use of a choral mass at the end of the track is quite effective. "War" is a bit more action-oriented, and is a nice heroic respite from the rest of the album. "Heart of a Volunteer," however, brings us right back to the same soft string and piano drama and romance that we've been listening to for most of the album. Some people have been complaining that there isn't enough score on this album—I disagree; I think there might even be too much score! (Of course, there were a few action cues in the film that didn't show up on the album that might have been nice to include, but I'm not really desperate to hear them again.)

No modern romance-set-against-a-tragedy film would be complete these days without the obligatory song. This time, Diane Warren once again puts her talents to work for producer Jerry Bruckheimer, and the result is the Faith Hill song, "There You'll Be." As songs go, it's pretty good, but it didn't fit in the film. Actually, it barely fit in the end credits, which is where it was relegated to being placed. (After all, how could they integrate a contemporary song in a period piece, without going the route of Moulin Rouge or A Knight's Tale?) In short, this is a rather decent album that presents the score better than the film itself does.