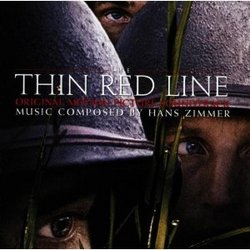 I must admit, cardinal sin though this probably is, I've never seen Badlands or Days of Heaven. Hell, I haven't even made it to see, The Thin Red Line yet. I do know enough about them to say that everything points to an extraordinary mixture of sight and sound. Occasionally, a movie matches with a composer and I figure it's got to be good. Occasionally, whoa boy am I wrong. In this case, Huuuua!!! I was right in a big way.

The first track, ("The Coral Atoll"), starts off quietly enough, but about 4 1/2 minutes into this track, something changes. It happens subtly enough that before you really notice the change in music and tempo, you notice the hairs on the back of your neck beginning to stand up at attention, like little soldiers preparing to hyper alert all their senses for battle. It does not turn into an action piece, but merely sits there and broods and frightens.

Track 2, ("The Lagoon"), continues the extreme moodiness early on starting with some disturbing choral bits. It sounds almost like an Arabic Morning Prayer. Zimmer uses this for a few moments before delving back into the orchestral work. This score makes more use of orchestral work and less use of synthesizer than many of Mr. Zimmer's other pieces.

The third track, ("Journey to the Line"), was the most startling for me. Like "The Coral Atoll", it starts out quietly: deceptively calm. It then edges into a sorrowful pitch.... you can almost hear the "loss of innocence" theme blending in about 3 minutes into the track. The music just continues to build and to build and to build until it can no longer logically contain itself. Explode is precisely what it does. At 4 1/2 minutes into the track, the music finally lets loose and I felt myself swelling out of my chair, almost shaking at the power of the progressive chords. I simply stopped reading the book I had, and stared open mouthed at the stereo. Even listening to it now, I feel the goose bumps rising on my arms. About two minutes later, the music turns ethereal. The first comparison that came to mind was Edward Scissorhands. It takes on a light, crystalline tone. Finally, at the end of the track, it fades off like the last notes of a symphony. That is what this one track was - a 9 minute symphony. This is one of those pieces of the score that, for me, without having yet seen the film, encapsulates the movie as I would imagine it. I would buy this soundtrack just for those 9 minutes of music.

I could go through the soundtrack track by track on this one, but I won't. Sufficed to say, they're all superb. If Zimmer does not take home the little golden boy trophy for this one, something is seriously wrong. It could be difficult, however, because of the lack of any real "theme". You could pick out a few pieces that seem to stick together to form one, but nothing as clear as is common. There is certainly nothing in the music that you will leave the theater whistling. I am sure that in this case that is so much the better. There are no heroic marches like you would find in Patton. At the same time, it is not strictly a "mood" piece constructed purely out of counterprogrammed, dischordant notes. Indeed, a large chunk of the music is quite beautiful ("Light", for example). When the tone changes, it does so disarmingly, which affects the listener before he realizes what's going on.

At about an hour long, the length of this one is satisfying. Considering the power of the music, any longer may actually have been too draining to endure. As stated above, with no obvious main theme for Bill Conti and the Oscar Orchestra to play, it might be difficult for this one to pick up a nod, but it damned well should. For God's sakes people, buy this score!!!!!!