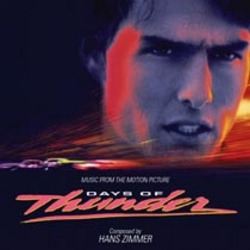 Clocking in at over 70 minutes, and featuring a number of bonus tracks as well as the song "The Last Note of Freedom" by David Coverdale, fans of that awesome late 80's/early 90's Zimmer sound have to wait no longer as this adrenaline fueled, supercharged Zimmer CLASSIC finally makes its way on CD!

Gorgeous art direction by Dan Goldwasser and in depth liner notes by Tim Greiving complement this fantastic, long overdue release! Fascinating, behind the scenes stories by producer Jerry Bruckheimer and star Tom Cruise are a true highlight of this package. Race to grab your copy today!