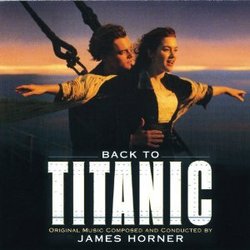 Review: Back To Titanic

by Dan Goldwasser January 27, 2000
2 / 5 Stars
Titanic was one of the most successful films of all time. The soundtrack, which was released in December 1997 was also a phenomenal success. At the time, composer James Horner announced he would go on tour with the music from Titanic sometime in 1998. Well, the concert was announced – and then postponed – but the tie-in CD was not delayed, and was released concurrent with the film's release on videotape. Called Back to Titanic, the CD features a newly recorded suite, source music, and more cues from the film.

The London Symphony Orchestra performs the highly touted 18 minute-long suite really well, but I don't quite see the purpose of it. We already have an amazing amount of music from (and inspired by) the film and this new suite seems to summarize it for us. It would have been nice to fill that space on the CD with the other music that is still unreleased.

Included on the CD are the source cues performed by Gaelic Storm - most notably the track, "An Irish Party in Third Class". The music is fun and energetic, but sadly I find that the inclusion of dialogue and sound effects act as a detriment to the music. It is as if they just copied the soundtrack from the film's source and slapped it on the CD. The hooting and hollering might add to the experience, but I found it to be distracting. Incidentally, Horner said that the inclusion of the foot-stomps and dancing sounds are "all part of the magic" – but is Kate Winslet's giggling and Leonardo DiCaprio's huffing and puffing part of that magic too? More importantly, does Gaelic Storm think the same way?

The actual score tracks are nice to have – most noticeably the track "A Building Panic", which contains a great piece of music as the orchestra slowly builds to a choral crescendo (used when the glass dome shatters in the film). The interesting thing is that this track is inter-spliced with "The Sinking" (from the first CD) in the final edit of the film – so the music we hear on this new CD is still not reflective of what we heard in the film. Of couse the original recording of the piano solo is included, as it was probably one of the most requested cues missing from the first CD release. Listening to this beautiful piece reminds me of how accomplished Horner is as a pianist. There are also a few other tracks from the film, but we're still missing music from the film.

Additional music includes two source cues by I Salonisti, otherwise known as the ship's band. Their performances of "Alexander's Ragtime Band" (which I don't recall being in the film) and "Nearer My God To Thee" (which I do indeed recall being present in the film) are enjoyable, moving, and (thankfully) dialogue-free. The track "Come Josephine, In My Flying Machine" is an interesting addition because based on the dialogue at the beginning of the track we can place it in the scene where Rose is floating in the Atlantic, waiting for rescue. But as this song (sung hauntingly by Maire Brennan) is not in the film, it seems a bit superfluous. There is also an additional version of "Nearer My God To Thee", as performed by accomplished violinist Eileen Ivers. Once again, this does not appear in the film.

It was while listening to this track – in conjunction with reading the press release that I realized what had happened. This CD was not just a sequel to the first soundtrack, it was also a CD to tie into the concert series. So that explains the inclusion of a lot of the music that didn't appear in the film, including the suite. But it doesn't explain the inclusion of dialogue. I find dialogue to be frivolous, and feel that it detracts from the experience of listening to the music. Which is why I also find the inclusion of the Celine Dion radio re-mix of "My Heart Will Go On" near to laughable. When I first heard it on the radio, I thought it was very funny – the dialogue didn't work on its own, and the timings (and choices) seemed way off base. So its inclusion on this CD really seems a bit much – I can't think of anyone who would honestly prefer to listen to the dialogue-ridden version of the song than the much better original recording.

Technically, the CD is a bit soft. I found myself turning up the volume more than I should have – only to have to turn it down when the music became bombastic. This might be due to the fact that Horner seems to favor softer music (which is fine) – but he really plays it soft. Of the 79 minutes of music on the CD, just under half was probably used in the film. This CD does not accurately represent the film, and the first CD didn’t accurately represent the film. So now we have two very full CDs with lots of music to listen to, but still nothing that accurately represents the music as it appeared in the film. I suppose that a "Music-Only" track on the inevitable DVD would be nice, but until then we will have to listen to these two CDs and mix them in our heads.