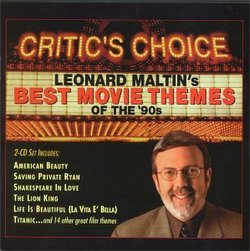 Film critic Leonard Maltin recently put together a 2-CD compilation album of his picks of the best movie themes of the 1990s. As one would expect, it includes themes from such films as Titanic, Basic Instinct, Shakespeare in Love, Saving Private Ryan, American Beauty, Schindler's List, and many others. But it also includes some rather unconventional choices (at least, ones I wouldn't have thought of). Maltin thankfully includes some rather extensive liner notes explaining his choices, which is a rather smart thing to do (unlike the recent "Real World - New Orleans" album, where they didn't explain any of their picks)!

The first disc starts out with "Critic's Choice Theme", an original work composed by David Michael Frank who also does an exemplary job conducting the City of Prague Philharmonic Orchestra in re-recording all of the scores on the album. The theme is quite peppy and upbeat, and for some reason, it really reminded me of the "Siskel & Ebert" theme in its jazziness and intensity. Titanic is the first film tackled, and it's done rather well. I still wonder why James Horner opted for the synthesized choral patches in his score - the live chorus used here (and in countless other re-recordings of Titanic) is just far superior. The nearly 14-minute cue is filled with mainly the romantic and dramatic moments of the score - the more exciting action suspense cues are sadly not included.

One of my favorite scores of the '90s, Basic Instinct is done pretty well here, and is well deserving to be album. "The Maverick Suite" reminded my why I love Randy Newman's scores, and this western is definitely one of the better ones he's done. The bluesy rhythms of The Firm is quite enjoyable, and the new recording of the main title from Ed Wood is pretty descent, but the theremin player needed just a little more practice - but the energy was dead-on.

While I thought the score worked in the film, it wasn't anything great (and why it won the Oscar is beyond me), but Maltin felt it was appropriate to include Shakespeare in Love. Well, to each their own! He totally redeems himself for that decision, however, with the absolutely riveting (and probably one of my favorite tracks on the entire album) Nightmare Before Christmas suite. This is the closest thing to having a "music-only" track (without lyrics) for the album. It runs 7:24, and I really wish there was more. From one of Danny Elfman's best scores to one of James Horner's most playful - The Mask of Zorro. Unfortunately, it's the performance, not the music that suffers on this cue. The performers just had a slightly slower pace than I would have preferred (I guess I want the original recording!), but it's still not too bad an effort. The first disc ends, of course with "Hymn To The Fallen" from Saving Private Ryan. The performance is again pretty good, but it has the same stigma of being a re-recording. It just isn't the same as the original!

Disc 2 of the Critic's Choice set starts off with one of Jerry Goldsmith's better scores in the 90's: First Knight. While I would have picked something like The Edge or L.A. Confidential, this is still a pretty good choice that I agree with. The next track threw me for a loop. I had never heard Fast, Cheap & Out of Control until I heard it on this album, and it was a rather moving dramatic cue. It is definitely high caliber material, but I don't see it popping up on other people's top scores lists - probably because of a lack of exposure. The quick and peppy main theme from As Good As It Gets is, well, as good as it gets. It's not the original, but it's got the same energy.

One of the best scores of the '90s (I totally agree with Leonard on this one) is definitely The English Patient. While I feel the film was a bit overrated, the score was certainly one of the best I'd heard that year, and it deserved the Oscar hands down. I still listen to the album to wake up in the mornings every so often. American Beauty is a really good score, but it sounds like many other Thomas Newman scores - but then, all of his scores sound pretty good.

James Horner's excellent score to Braveheart is a great choice for the album - the fact that he got two nominations that year (also for Apollo 13) shows that he certainly knows his stuff - even if some people think he knocks himself off a bit too much. Life is Beautiful is not a surprising inclusion - there are a lot of Oscar winners on this album. However, with only two real solid themes in the film, used over and over again, this score suffered from a bout of Benini-fever, and I don't think that it was one of the best of the 90's. Still, to each their own. Elmer Bernstein's music from The Rainmaker is rather bluesy, but the cue included here on the album ("Kelly's Theme") is more subdued and dramatic. Full of emotion and meaning, it shows that Bernstein is truly a master of the craft.

The album also includes an orchestral suite of music from the Disney power-vehicle The Lion King and it's a great example of what can go wrong when you try to take a full-powered action score by Hans Zimmer (which includes fast percussion and synth elements) and bring it over into the purely orchestral realm. It felt like half of the sound was missing from the cue, and while I love the score to death, I felt as though this re-recording was actually killing it. Considering the rest of the performances on the 2-disc set, this is by far the worst included. The final cue is a suite from Schindler's List. I think the reason this is the last cue (as opposed to being at any other place on the album) is because it's the most painful, heartwrenching score to listen to. As it is, the 15 minutes they put on the album is enough to make one cry. Powerful and emotional, this is truly one of the best scores of the past ten years.

There were some good choices, and some interesting choices that Maltin made for this album. When all is said and done, at the end of the day he has compiled a rather enjoyable 2-disc set of some of the better scores of the past ten years. While there are plenty of scores that deserved to be on this album, I think that it's still a great overview for people who aren't as familiar with film music as those of us in the "biz" are.