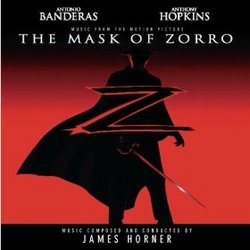 The Mask of Zorro

Review: Mask of Zorro, The

by David A. Koran June 23, 2001
2.5 / 5 Stars
Mix a little "Thunderheart", a tad "Willow", and a healthy dose of "Riverdance"-ed flamenco and you have James Horner's latest summer blockbuster release, "The Mask of Zorro". This isn't necessarily bad for Mr. Horner, who's musical repertoire reads mostly like a West Virginia Old Testament Bible ("'Star Trek II" beget "Aliens" beget "Project X" beget "Sneakers"... And so on.. And so on...) [for those of you in England, substitute East London for West Virginia]. There are some nice flourishes in this score, at least in the first track, leaning me more unto forgiving Horner for his "Titanic" schlock-fest of last year. I'm looking forward to the action, suspense, and dare I say it... The sex... Yes, the sex. You see... To me... If you can't slap a sexy sax solo on it... It ain't a love scene... And being that this is a period piece, you can't. So, this makes Horner have to score sultry scenes without Uilleann pipes or the aid of a saxophone (yeah, yeah.. Barry had it easy with "Body Heat", right?!).. A challenge to mere mortal composers.

Okay, enough of the sex talk, lets get down to the business of a film score. I haven't had time to see this movie yet (I had a "chance" to see it on videotape... But I was stuck watching Mulan instead), but from what I've been hearing about it for the past year or so, places it in my "I'd like to pay $3.50 to see it" category of movie going experiences. First you have the ultimate cool under pressure, retiree, Sir Anthony Hopkins playing the old Zorro (need I say more?) and Antonio "I acc-ent-u-ate each syllable" Banderas as the swashbuckling revenge-laden young Zorro. With Catherine Zeta-Jones ("The Phantom") as the female lead ("Rowr!") and a supporting cast that's... Well... Not listed on the insert sleeve, one would hope for a return to the amazing Zorro series of the past... Even if they were a bit less campy than say... Umm, "Batman And Robin". As with most Sony soundtrack releases of late, we have a full score, and not one of those mamby-pamby twenty minute ones we get cause no one has the balls to shell out another $75,000 for some more music. Granted, I guess, if you had close to $200 million in residuals from Titanic soundtrack sales, you have a bit of cash to spread around on novelty releases for soundtrack lovers.

Well, I said I'd bespeak some soundtrack stuff and not besmirch record labels while I had a podium to speak from, so let's get back to the music. The style is typical, not of Horner this time, but of the genre, through the use of maracas and castanets (and other similar percussion) and the flourish of Spanish guitar. When I mentioned above in a reference to Willow, I mean so in the use of the pan pipes so liberally in spots, a poor man's saxophone I suppose. I mean, pan pipes are Andean, not Mexican, not even mountain or hilly Mexican. Okay, enough ethnic references. Rising action is always accompanied here by rising strings, so much so, I believe the orchestra never sat down. The quiet spots, almost always woodwinded, sometimes switching almost cartoon-like during the "sneaking" sequences, but hey, you have to have fun somewhere, right? In essence, you feel like you've entered a throwback to "Willow", but the brass sections, accompanied by flamenco guitar and castanets (or woodblock... Because I believe you'd have pretty knarly fingers after the workout Horner gives that castanet player), provide the necessary change of pace. To stick with the stereotypical layout of the music to accompany such a picture, most of the themes are based on a minor harmonic (yes, it's not happy music... But neither is the story), leading to mostly downtrodden feel the first half, lest I say, most of the score. Some tracks, Horner seemed obligated to steal some Samuel Barber for thematic material in track 4, "Elena's Truth" (shame, shame!) and even some of his own stuff from, yes, you guessed it... "Aliens" (even with an inversion of yet another piece later on track 11).

Alas, Horner finds the saxophone's cousin, once removed, the clarinet (or alto flute for some parts), to act as lead for portraying the intimacy between Banderas and Zeta-Jones. I'd give Horner a 5 out of ten for effort for at least trying to tackle an ethnic music genre that wasn't based, born, or bred on the English isles. There's a lot of unnecessary bombastic material, much the same fate "Willow" suffered, but at least here he's allowed to use a solo trumpet to play different scale progressions. I'd say that if Horner needed to take notes, he'd best become friends with Morricone and Jarre, folks who know, and have time tested this musical corner of the world, or more recently Kamen or Grusin (even though Grusin's entry was more Caribbean influenced). Now it seems like this is a little harsh in the way as critiques go, but one thing I can detest in any film score experience is, one, the lack of real research into particular area of film (damn it, they made a ton of Zorros, at least look there), and the blatant unoriginality (read : "lifting") of musical passages from one's previous or other's work. There's nothing worse than a musician with an ego, and then hoisting that ego on an unsuspecting audience in the form of "listen.. Have you heard THIS before?". I mean, I have nothing against someone who brings to light a neglected medium, such as film scoring, but instead of "Titanic" I would have preferred it being someone like Goldsmith ("Mulan") or even a relative neophyte (as per measuring against Goldsmith) like Isham or Fenton. So, with this being a passable effort for both it's placement int he film, and as a standalone piece of music, and it's marketing bearing the words of "From the composer of 'Titanic' its...," I would recommend a purchase just for the sake of hearing Horner strike out in a somewhat new, but yet retread direction.