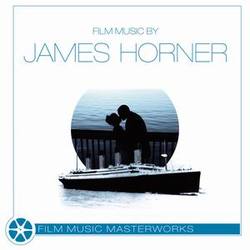 This is the movie score equivalent of JH Dim Sum. You have a sampling of Horner\'s 80\'s classics (Star Trek II: The Wrath of Khan, Cocoon, Willow), his great 90\'s work (Apollo 13, Braveheart, Mask of Zorro) and boring stuff he did recently (Troy).  It\'s easy to take jabs at the composer\'s work of late, but those who emphasize this say it mainly because we remember the greatness of his past glories (no pun intended).  Going through this album just reminds me that in the day, James Horner showed off his mad skills. For 13 years (1982- 1995) he held court as one of the best composers in Hollywood and no back-handed compliment by a random hack at a keyboard will ever take that away from the man.

The City of Prague Philharmonic Orchestra is much better suited to Horner\'s music than the recent John Willliams compilation they did. Horner\'s music is often legato with a slow brooding build and a majestic sweep and it plays completely into their strengths. The tracks are all solidly produced and sound like the real thing. Apollo 13 has the appropriate dignity, Cocoon has the appropriate magic and Mask of Zorro is still just plain fun. The only exceptions are the Wrath of Khan and Willow tracks which, while decent, have a xylophone and a pan flute which are distractingly mixed with the rest of the orchestra.

This is a very condensed release - only 10 tracks of music, and it is too short. It does have enough of his great pieces to say that this is a properly representative album. Back in the late 90\'s there was a much more comprehensive album (The Essential James Horner Film Music Collection) which covered a lot more material. But that\'s 8 years old and a newer, more comprehensive James Horner "best of" album deserves to be made. Put in some of his ignored early greats: Wolfen. Krull. Searching for Bobby Fisher. Brainstorm. And there\'s still an occasional new score of his that has great work, like The Chumscrubber. Then get some Sneakers, A Beautiful Mind or that great opening to Bicentennial Man - wait, that\'s all the same score.