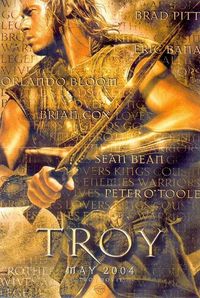 Based on Homer\'s The Illiad, Wolfgang Petersen\'s epic Troy featured Brad Pitt in the role of Achilles, with an all-star cast of Peter O\'Toole, Eric Bana, Orlando Bloom, Brian Cox, Brendan Gleeson, Saffron Burrows, Sean Bean, Diane Kruger and more. When it was first released in theaters in 2004, Troy received mixed reviews. Some critics heralded the sword-and-sandal spectacle, while others derided the lack of emotion, and hollow characters. Seeking to redeem some of that, Petersen has recently released his Director\'s Cut of Troy on DVD.

Featuring 30 additional minutes of footage, this wasn\'t just slapping deleted scenes into the film and calling it a day. Rather, there are "over 1000 new cuts" done to the feature, from extra bloody violence, more sexuality and nudity, and even a chance to flesh out the motivations of many characters. While it\'s not as dramatic a revision as Ridley Scott\'s Kindom of Heaven, the changes do improve the film a bit, making it a bit more interesting.

Unfortunately, a blatant casualty of the resulting changes is music score. The film originally was to be scored by Oscar-winner Gabriel Yared, who recorded his music for the film before it was unceremoniously dumped at the last minute, and Oscar-winning composer James Horner swooped in to save the day. His score was effective enough, but many claimed it lacked the epic scope and power of Yared\'s work. So it was rather odd, when watching this new cut of the film, to note that the music score had been drastically tinkered with. Horner\'s score had been reduced to background wallpaper - his main themes for Achilles and the Love Theme have been dialed down, and even removed altogether from some sequences. Bits and pieces of his score are now repeated all over the place, resulting in a bit of a cut-and-paste feeling. Even the Josh Groban song from the end credits has been excised and is no longer in the film at all. Some temp score has been retained, including a cue from Basil Poledouris\' Starship Troopers, three tracks from Ed Shearmur\'s The Count of Monte Cristo and five cues from Elfman\'s Planet of the Apes, which is most notably featured in the fight between Achilles (Pitt) and Hector (Bana). Some of Yared\'s music even makes an appearance, and he gets credited with "Additional Music" in the 2007 credits at the end of the film. Overall, it\'s a bit of a music mess, but the film is still enjoyable and better than the theatrical cut. Just imagine how much better it would be if there was a score that fit it!

On the 2-disc DVD release, the film is now split up between the two discs, to allow for a higher quality bitrate on the film. The picture is has been re-color timed from the theatrical release, and comparing the two shows a much more vibrant, vivid color palette. It\'s an excellent transfer, and the new footage is imperceptible from the original. Audio is only presented in a 5.1 Dolby Digital English track. It would have been nice to have a dts track for higher quality, but it\'s still a loud, cacophonous bang-up action-heavy sound mix that immerses you nicely in the world of Troy.

For extras on the DVD, we\'re not given the commentary track that so many people had hoped for. Instead, Wolfgang Petersen shows up for a little introduction before the film to explain his reasons for making this new director\'s cut of the picture. The only other new feature for this release is the "Troy in Focus" featurette, which runs about 23-minutes long, and features Petersen explaining in more detail what was changed, and why. There\'s also some nice behind-the-scenes stuff, most of which was previously released. "In the Thick of Battle" gives us a look at the stunts and making of the film; "From Ruins to Reality" explores the historical references and set construction; "Troy: An Effects Odyssey" examines the visual effects and sound effects needs to create the massive ship armada and battle sequences; "Attacking Troy" covers the art production aspect of the film (this was previously only released as a Best Buy exclusive bonus disc); and finally, "Greek Ship Towing" is the visual effects blooper reel, with some amusing bits. The theatrical trailer is included to round things off. Missing from the previous release is the "Gallery of the Gods", which was a 3D animated guide to Greek myths. It\'s too bad that they didn\'t include the theatrical cut as well, but given the nature of the re-editing, seamless branching would have been all but impossible.

Troy has managed to come one step closer to being the full-fledged historical battle epic that it should have been the first time around. Petersen made a good decision in "finishing" his film, without the constraints of a running length, and the MPAA. The only major issue with this version of the film is the music, but it\'s easy to look past it and appreciate the sword-and-sandals spectacle as it was meant to be.