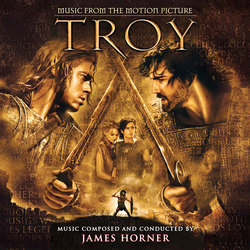 Released by Warner Bros. in 2004, Troy is the latest release in Intrada's ongoing efforts to reexamine and expand the work of James Horner. For Troy, Horner composed one of the longest scores of his career, some two hours in length, all of it written and recorded in relatively short order to replace another score. The cues were amazingly well-spotted, appearing in the finished theatrical cut precisely where Horner intended them to appear, with very little editing or truncating of what was recorded during the sessions— a rather uncommon occurrence in film scoring, especially with scores of such extreme length. There is a wealth of previously unreleased music, and to prepare this Intrada 2-CD set, Intrada was provided access to all the final takes from the digital two-track scoring session masters made by Simon Rhodes at the Todd-AO Scoring Stage in Studio City, California. The sequence of music in this set follows that of the film with one exception. In keeping with Horner's own original album preference, the orchestral portion of the end credits plays out of the climactic "Sacking Of Troy" sequence, followed by the song as a standalone track.

Customary for the composer, several of the cues are quite lengthy, encompassing a wide variety of thematic material and emotional content. There are several important themes and numerous smaller ideas as well. Even with such an array of melodies and motifs to work with, Horner followed his architectural norm by finding the heart of the overall story and building his music outward from there.