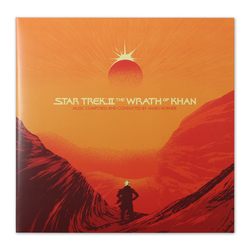 This year marks the 50th Anniversary of Gene Roddenberry's inimitable Star Trek franchise and Mondo is honored to kick the year off with an expanded soundtrack release of arguably one of the greatest chapters in Trek history: The Wrath of Khan.

This expanded edition soundtrack features audio never before released on vinyl. Special thanks to Mike Mattesino, Lukas Kendall, and Neil S. Bulk for their work on the remaster for Retrograde Records, and their help with bringing this album to life on Vinyl.

This deluxe 2XLP vinyl release features original artwork by Matt Taylor, exclusive liner notes by Devin Faraci, and has been remastered for vinyl by James Plotkin.