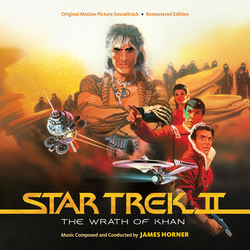 Produced by Neil S. Bulk and Mike Matessino, and re-mixed and mastered by Mike Matessino, this special 2-CD release is limited to 10000 units and features art design by Jim Titus. Disc One, and the additional score tracks on Disc Two, have been re-edited and remixed in hi-res from newly discovered 1st generation analog 3-track stereo tapes. The original soundtrack album has been newly remixed from digital-to-analog 3-track stereo tapes made in 1982.