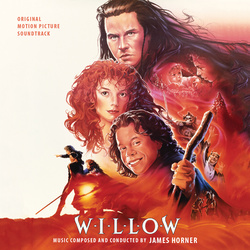 Following quickly on the heels of Intrada's release of James Horner's Star Trek III: The Search for Spock, Intrada presents one of the most sought-after soundtrack expansions - Horner's epic fantasy score to the 1988 film Willow. With the cooperation of Disney and Lucasfilm, Intrada has prepared a 2-CD set featuring a greatly expanded program of Horner's score. Up to that point, it was probably Horner's most complex work. The score features at least five themes, including a noble theme for Willow, a heroic theme filled with adventure and triumph, a beautiful love theme, a simple theme for the baby Elora and a serpentine motif for the evil Queen. It's a score that runs over 100 minutes, making it one of his longest works, featuring some of the longest and most cohesive cues of his career. It's no wonder such a massive, colorful and passionate work has been in demand for so long.

While the original album featured a generous 73-minute program, Horner had chosen a larger selection of cues to possibly include, including significant and lengthy cues such as "The Enchanted Forest" and "The Sled Ride." This release is mastered from the original stereo sessions mixes made by Shawn Murphy and recorded at Abbey Road and Air Studios.

Willow is a traditional fairy tale quest that blends elements from many sources, including J.R.R. Tolkien, the Brothers Grimm- and even the Bible. The eponymous character is Willow Ufgood, an aspiring sorcerer (Warwick Davis). Willow is a Nelwyn, a race of small folk that farms and mines peacefully in a land surrounded by Daikinis, "tall folk" engaged in a bitter war against the evil sorceress Bavmorda (Jean Marsh) and her daughter, Sorsha (Joanne Whalley). An infant princess who is destined to overpower Bavmorda and restore peace to the world is entrusted to Willow, who must deliver her safely to her faraway kingdom. To do that, he must conquer daunting terrain, fight terrifying trolls, ruthless warriors, a two-headed dragon and all the magical powers Bavmorda can summon against him.