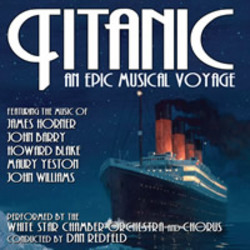 BUYSOUNDTRAX Records is proud to announce the release of Titanic: An Epic Musical Voyage, performed by the White Star Chamber Orchestra and Chorus Conducted by Dan Redfeld. In the 100 years since the famed RMS Titanic hit an iceberg and plunged into the ocean, it has been celebrated on stage, television and in film. This collection of new recordings, which features extensive liner notes by Randall Larson, celebrates the music from these productions. Titanic: An Epic Music Voyage will be available digitally on April 3rd, and CDs begin shipping on April 10, 2012, the 100th anniversary of the maiden voyage of the RMS Titanic.

The heart of this musical voyage is the music composed by James Horner for the Academy Award winning film Titanic. In addition to a number of tracks of the score from the film, singer Zoë Poledouris Roché performs "My Heart Will Go On." Also featured on this album are tracks from S.O.S. Titanic (Howard Blake), Raise the Titanic (John Barry), "The Titanic Trot" from TV's The Time Tunnel (John Williams), and selections from Maury Yeston's Tony winning musical Titanic. Rounding out this recording are two historical tracks, an arrangement of traditional Irish Music (by Joohyun Park) and "Nearer, My God, To Thee", the hymn reportedly performed by the Titanic's dance band as the ship went down.

"We've taken these film scores and reimagined them into a different kind of compilation album," said the album's producer, Ford A. Thaxton. "This is a very different take on it. We wanted to do something that would have a timeless quality to it."

The label turned to Dan Redfeld to launch this musical voyage. Redfeld has had a lifelong interest in the Titanic. "I'm not sure I know what the attraction was," he said. "It's the fact that it was the grandest ship in the world and it hits an iceberg and sinks and 1500 people go down. It's the whole series of little events that lead to this massive catastrophe. It's the people who stayed at their posts, particularly the stokers under the ship who kept the ship lit and the band playing on until the last moments. I don't know if that kind of character exists anymore. There is just such incredible drama about it and I think it's what gets to people about it. The epic-ness of the disaster, for a composer, evokes passionate music."

Dan Redfeld is a classically trained concert pianist and composer/conductor who studied at Boston's New England Conservatory. While many of his fellow students were embracing modernistic, atonal music, Redfeld was more interested in tonal, neo-romantic music. He has written music for stage, concert performance and screen. The premiere of his latest opus, Travels for Piano Quartet, was performed by Central4, a chamber group that named him Composer-In-Residence. Redfeld is currently musical directing and conducting Eli Villanueva's opera, The White Bird of Poston, for the Los Angeles Opera.

Titanic: An Epic Musical Voyage will be available digitally on April 3rd, and CDs begin shipping on April 10, 2012, the 100th anniversary of the maiden voyage of the RMS Titanic

SPECIAL NOTE: The first 100 copies purchased from the BUYSOUNDTRAX website will be autographed by Music Director Dan Redfeld and Vocalist Zoë Poledouris Roché.