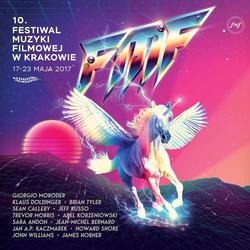 Continuing our association with this remarkable event, Varčse Sarabande has again produced the official Krakow Film Music Festival CD 2017. Featuring over 75 minutes of music by the composers who were part of this year's concerts, it is an eclectic sample of film music's incredible variety.

Deluxe packaging include photos from the festival's amazing history and a lengthy essay by Robert Townson that recounts the festival's highlights from past years.