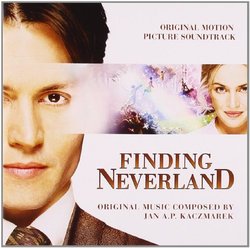 Bolstered by a winning performance by Johnny Depp, Finding Neverland is being heralded as one of the best films of this year, which I would agree with. It is quite engaging for its full running time, has an excellent pace and writing, the characters always seem truthful in their actions and behavior and there is a sense of magic about the film. Much of this credit can also be presented to Jan A.P. Kaczmarek. His score as heard in the film works wonders, remaining subtle and understated yet strongly supporting each scene with heartfelt emotion.

The album begins with "Where Is Mr. Barrie?". Pizzicato strings, chimes and piano bound about like giddy children. More strings and woodwinds join, all in high registers, the energy consistent, and then this is all augmented by a sprightly boys choir. The style is pleasant light classical, but with a dollop of mischief added. "The Park" stays in the upper registers with strings, flutes and oboes and what sounds like a pennywhistle, to underscore J.M Barrie\'s Scottish heritage. "Dancing With The Bear" scores the first scene of Barrie showing the children the all-encompassing power of their imagination, as his faithful dog magically is seen as a giant waltzing bear, all accompanied by a Russian-influenced tune. High range strings and piano soar sweetly in "The Kite", while "The Chess" presents the main theme in a plaintive setting and this then leads directly into "Neverland – Piano Variation In Blue", a gorgeous piano solo variation of the same thematic material.

The fun, playful side is explored again in "The Pirates", as Barrie leads the children and their imagination on a grand pirate journey, highlighted by strident brass and strings. The more adult, dramatic aspects of the story are heard in "The Marriage", a sad, melancholy cue for strings, harp and woodwinds, painting a portrait of how his relationship with his wife slowly deteriorated as he spent more time with the widow\'s children. "The Children Arrive" revisits the sprightly melodic material from the first track, as solo piano dances along in the upper registers in order to accompany a group of orphans invited to witness the opening of Barrie\'s play, Peter Pan.

"The Peter Pan Overture" is actually performed on screen by the pit orchestra for the aforementioned opening night of Barrie\'s masterpiece, and is also based on the light, innocent textures of "Where Is Mr. Barrie?". The solo piano returns in "The Park on Piano", a lovely variation on the pennywhistle/woodwind melody heard in the short track "The Park" and endemic to the album, not heard in the film itself. The orchestra returns in "The Stairs", in the more melancholy vein, but then brightening into "Impossible Opening" as a delightful waltz tempo playfully takes over, soaring through the strings, woodwind and piano. Acoustic guitar highlights the measured pace of "The Rehearsal", while "Neverland – Minor Piano Variation" is another winning piano solo of grace and tenderness.

"This is Neverland" begins gently with subtle high strings and mid-range flute, before the playful side cautiously emerges, the pennywhistle and woodwinds join in and all sections soar in representation of visiting Neverland for the first time. The thematic material is culled from the "Neverland – Piano Variation In Blue" track, but heard here in a full orchestral guise and is all the more magical because of it. The boys choir returns in "Why Does She Have To Die?", a very affecting and glowing cue. "Another Bear" is an extended, bolder variation on the earlier cue "Dancing With A Bear", still in the waltz tempo and slight Russian flavor and then finally the album closes with the "Forgotten Overture", itself imbued with giddy, child-like energy presented in woodwinds first and then into strings and boys choir. This mirrors the textures heard in the opening track and is a fine way to round off a fine score, which is emotional without being sappy or syrupy, has marvelous piano solos and charming sense of wonder throughout.