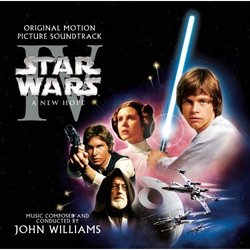 Boy, how do you start? I tend to keep my star ratings down so that I rarely get up to four and a half stars. And five stars? That should happen once in a blue moon when a score truly deserves it. For times like this.

When you ask people what their #1 favorite score is, the popular choice is the OT - the original trilogy. But let me ask the dangerous question: does it deserve to be? Not to pull a revisionist attitude, but the allure of the original films faded some for me in the mid 90's. The original Star Wars is a great B-movie. Maybe the best, but it is still a B-movie. For all of the accolades tossed at the films, the fact that Star Wars and The Empire Strikes Back are so uniquely successful is, in the end, a happy alignment of the people involved. George Lucas is often revered as a great filmmaker when in truth I believe he is a great producer who at the time had the right combination of talented people working on those two movies. He progressively lost his co-writers (William Huyck, Gloria Katz, Lawrence Kasden), his Producer (Gary Kurtz) and his ace editor (Marcia Lucas) all to diminishing results in his sequels and prequels. But outside of the effects and sound people, one creative collaborator would always stay the same: John Williams. If you ask George Lucas the one aspect of Star Wars that came out better than he expected, the answer is always "the music."

You've heard this score before many times. You most likely have a copy of it somewhere and if you don't, then you should as it is one of the basic building blocks of any soundtrack collection. Something's still raw about this score. While John Williams' music afterwards would quickly become more refined, here he wears his classic Hollywood influences openly. Williams combined the best aspects of Holst, Wagner, Prokofiev, Steiner, Korngold and Herrmann into one coherent whole that had its own identity. Star Wars feels comfortably familiar at first listen, full of childlike excitement and recalling a certain nostalgia for classic movies only at a much faster pace. This score single-handedly revived romantic film scoring and the "John Williams" sound would set the standard of the modern classics of film music. In addition, the double Oscar win of Williams on this film and Jaws cemented his position as the premiere film composer of the industry, a position he still occupies twenty-seven years later.

This is a simple story, brilliantly told through music. Williams' skill at thematic development is genius. Look at the first yearning iteration of the Force theme in "Binary Sunset" then the finale triumphant overture in "The Throne Room". The Star Wars themes work equally well early used gently in "The Moisture Farm" or as a swashbuckling reprise in "Chasm Crossfire". "Princess Leia's Theme" is gracefully light and innocent even when it is boldest. The oboe and French horn "Jawa" theme contrasts playfully the other themes (much like "Yoda's theme does in Empire Strikes Back and the Ewok theme does in Return of the Jedi).

The movie propels our heroes from one situation to the next at breakneck scene and with it, Williams quickly switches a melody to different sections of the orchestra for melodic color or juxtaposes themes deftly at key moments. Case in point: "Ben Kenobi's Death" starts with a mournful version of the Force theme, leaping into a full-blown romantic statement of the Leia theme then jumping back into a rushed Rebel fanfare. From there, the music then slows into a reflective reprise of the Force motif momentarily before increasing anxiety with contrasting swirling and pizzicato strings anticipating a firefight in the full blown action cue "Tie Fighter Attack" using the Rebel Fanfare. The music has transitioned in theme and mood five times in less than two minutes.

There have been multiple album releases of the trilogy scores over the years. The 1997 RCA/Victor versions released in conjunction with the Special Editions have been to this point the final word and with this new release out, that hasn't really changed. The new disk still includes all of the Benny Goodman inspired "Cantina Band" cues and the alternate "Binary Sunset" and different "Main Title" recordings. This is simply a repackaged version of the exact same albums in time for the new DVD releases. The "enhanced" Sony Music DSD (Direct Stream Digital) re-mastering makes no difference in terms of sound and I tried the CDs on multiple systems just to be certain. The extensively detailed liner notes in the previous edition have been removed and replaced by a web link for exclusive screensavers and "collectable" artwork from Japan edition book covers. Fine, but it has nothing to do with the music and everything with trying to sell yourself something you already have.

So if you have the previous releases, there is absolutely no reason to run out and get these versions. If you don't have the disks yet, I still say find the RCA/Victor versions.