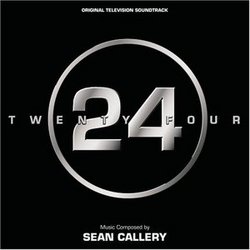 Fans of the popular drama, "24", will rejoice at the Varese Sarabande release of Sean Callery's Emmy award-winning score to FOX's hit show. Callery, who also recently composed the music for the James Bond: Everything or Nothing video game, quickly became the bold voice of "24". "24" has pushed the limits of today's television drama with its innovative combination of real-time sequencing and unpredictable plots. From the beginning of the pilot episode to the suspenseful climaxes of each of the three seasons, Callery's music has accompanied a wide array of scenes, from midday to the middle of the night, from deserts in Mexico to the streets of L.A., and from the chaotic city to the quiet of the oval office.

The long awaited album release of Callery's music features a mix of cues from the first three seasons, in varying order. While this out-of-chronological-sequence may seem unfaithful to the structure of the show, the music flows better with this arrangement, from the crackling electronics of the ticking clock in the main title to the score that accompanied the finales of each season closing the album. It is a brief glimpse of the music from the three seasons, but offers a good summary of Callery's work. Varese's packaging is topnotch, some of the best the label has done. The insert features pictures of the starring cast from each season as well as a note by Sean Callery on the scoring of the pilot episode. But most interesting is the track-by-track commentary by Callery about the influences that constructed each cue. This both puts the cues in context within their appropriate seasons and helps to explain the wide variety of sounds on the album.

The "24 Theme" sets the tone for the whole series with a quiet, yet bold theme on French horn, which filters in and out of the music over the course of all three seasons. The synthetic style of the music is similar to video game scores such as Bill Brown's work for Tom Clancy's Rainbow Six series and is very effective for the technologically-savy show. The variety of musical styles, however, which is due to the range of scenes over the course of a single day, is apparent within the first few tracks, with "Up and Down Stairs" consisting of techno music and the following cue, "L.A. at 9:00 AM", featuring an electric violin and percussion underneath the main theme. The electric violin returns in "Jack's Revenge at the Docks" along with a female vocal solo and is among some of the orchestrational techniques Callery utilizes. A duduk and acoustic guitar are featured in the beginning of season three in "In Pursuit of Kyle" and "Salazar's Theme" respectively.

The music ranges from soft piano for emotional scenes ("Jack Tells Kim He's Not Coming Back", "Jack and Kim Trying to Reconnect") to hard rock-influenced cues for action sequences in the show ("Kim and Teri's Escape from the Safe House"). Some of the most exiting cues are for chase and action sequences, such as "'Copter Chase Over L.A.", which is a Hans Zimmer-like cue for the suspenseful scene. Since the show covers every minute of a single day, Callery landed the task of making the pace of the show remain consistent, despite downtime for the characters. Certain cues that accompany these scenes feature a moving electric percussion beat and often the main theme ("L.A. at 9:00 AM", "Jack in the Limo", "Season Three Finale/Jack's Humanity"); this style of music is also used during the framed-style montages in the show when it presents numerous scenes and characters at once, usually at the end of each show.

"Palmer's Theme" uses a solo trumpet to give a patriotic feel to the scenes of the noble, yet conflicted Senator-turned-President and is one of the highlights of the album. "The Bomb Detonates" slowly builds to the first of a couple climaxes for the second season before dropping to silence for the detonation. Oddly enough, the three finale cues ("Season One Finale/Teri's Death", "Coliseum Finale", and "Season Three Finale/Jack's Humanity") each feature a very different style of music, showing that this show has not yet become as formulaic as some shows on television today. Callery's range of music from techno and rock to solo instrumental performances continue to make "24" an innovative and diverse show. His bold, patriotic main theme represents Jack Bauer's fight against terrorism that lies at the foundation of the series.

Additionally, Apple's iTunes offers a remix of the 24 Theme by Armin van Buuren and Sean Callery. It is a techno mix of the theme with Kiefer Sutherland's voice and the show's trademark electronic counting-down worked into the music. This track is for completists only.