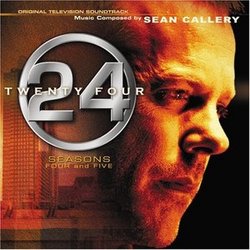 I have been waiting for the soundtrack to "24: Seasons 4 and 5" for a while. There have been very few instances where I have wanted to rewind a television show because of a score cue, but one episode from the fifth season of "24" had that effect. Fortunately, I had recorded that episode, but now the cue is available on this album, which I will get to in a minute. To step back, I want to make the observation that composer Sean Callery has taken his "24" compositions to the level that he wants them at. This familiarity with the musical scope of "24" allows him to expand his exploration of styles for the show, while maintaining the "24" soundscape. Most apparent is the more frequent use of the "24" theme on this second album compilation. Callery\'s growth as "24"\'s composer is evident in the selection of cues for this album, which is heavily weighted toward music from the fifth season. As such, I will talk about the other cues included on the album and then get to that season\'s cues.

First on the album is the "24 Main Title", which is actually the title from 24: The Game, which was recorded with an orchestra at Abbey Road and, until now, has only been available online. As I mentioned in my review of the game score, it is amazing how much difference the orchestral arrangement makes. There are great brass chords in here and just a huge improvement in the sound. That having been said, I also think "24" benefits from a very electronic, synth-heavy tone, as it enables Callery to compose more effective action music that backs up CTU. Some examples of this are in guitar heavy cues such as "Collette\'s Arrest" and "Mandy\'s Plan". This album also contains two game play cues from the video game, "Mission Briefing" and "Base Mission". Additionally, there is a Season 3 cue, "C.T.U.", and a cue that partially consists of a cue from Season 2, "Jack\'s Women", as it combines Kim and Audrey\'s music. Season 4 cues are few, but those selected are good. These include "Closing in on Marwon" and "Reviving Jack", both of which feature statements of the "24" theme.

The Season 5 cues make up the best parts of the album. To begin with, there are two major action sequences, "Infiltrating the Sub" and "Jack Storms the Gas Plant" - the latter of which contains a few up-tempo statement of the "24" theme. "The Name\'s O\'Brian - Chloe O\'Brian" has been a highly sought cue by many fans, which is a Bond-like cue (with spy guitar) for some of Chloe\'s more active scenes. And then we have the two best. The first is the one I rewound to, "Lynn McGill\'s Sacrifice", which is when Sean Astin\'s character runs out into the nerve gas to save CTU. A slow start, the cue picks up speed with pulsing strings and horn that build into a very heroic cue. The second is "Logan\'s Downfall" which is from Callery\'s Emmy Award-winning finale episode score. This cue contains the music from Logan\'s arrest and ends with a final, patriotic statement of Palmer\'s theme, which is great, and very appropriate. These synth cues are among Callery\'s best and, like his "Main Title", would truly benefit from an orchestral recording at some point to flesh out the patriotic tone of both.

The liner notes, like with the first album, contain Callery\'s comments on each cue and say which episode they are from. Callery says that one of the slower cues, "Logan\'s Near Suicide" is from his favorite scene in the show, though I am guessing not his favorite cue. The album ends with "Tony\'s Farewell" from Season 5, which is a slow, but uplifting cue with some wordless vocals in the background. Fans of the show will love this album as it covers most of the moments that stood out musically from the show. I\'m just looking forward to where Season 6 takes us in January.