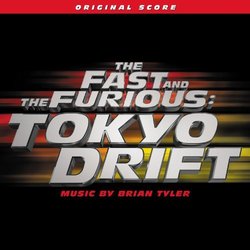 The Fast and the Furious: Tokyo Drift - Original Score

Review: Fast and the Furious, Tokyo Drift (score), The

Prior to his explosion of success in the film score world in 2003, composer Brian Tyler wrote a bit of music for the first The Fast and the Furious, which BT scored - not Brian Tyler. Following scores such as Children of Dune, Frailty, and Constantine, I was very surprised to hear that Tyler had been hired to score the third installment in the Fast and the Furious franchise. Normally, I wouldn\'t expect the second sequel in such a series, without any of the original cast, to receive the attention of any composer, let alone one as successful as Tyler. But it did and the result is a blend of electronically manipulated live instruments, and orchestra, with a heavy emphasis on the former.

Tyler\'s score is heavy in the guitars, good examples being "Mustang Nismo", "Welcome to Tokyo" and "Sumo". These cues introduce a harsh electric guitar motif that is woven in and out of some of the action cues. Other tracks are purely electronic, such as "Saucin\'". On the other hand, two cues that stand out feature the Neela theme, which is played on the acoustic guitar in "Neela Drifts" and "Neela" at the beginning and end of the album, respectively. Most of the action cues ("DK vs. Han", "Downtown Tokyo Chase") feature the string sections behind heavy processed organic instruments, and percussion. A number of these cues, such as the ones noted above, remind me of the Bad Boys score from 1995 by Mark Mancina, more than anything else.

The producers obviously wanted electronics; BT is known for a number of trance techno albums and he set the tone for the franchise. What Tyler did to elevate his score above the set standard was to include the orchestra to as great an extent as possible. The opening suite (combining "Togue" and the film\'s climax cue, "The Fast and the Furious") features a mix of all the electronic ideas backed by strings and a small brass section, though the latter does not make an appearance in the rest of the score. Also, Tyler adds an orchestra-only version of this cue to the end of the album, "Symphonic Togue". This is the only cue that truly sounds like other Tyler scores and is a nice action piece performed with energy by the orchestra. While it may have been unnecessary for the film\'s needs, Tyler makes a nice effort to add some electronic-free music to the soundtrack for the fans. This actually closes the album with a quiet cello solo, which was quite unexpected.

With the need to provide an action score that works alongside the previous two films, Tyler did a good job providing a varied score that had the right amount of electronics, but getting some orchestra in there too. Between the symphonic cues and the Neela cues, fans will find some music to enjoy on this disc. The album comes in at over an hour and it does feel a bit too long, with the minimal thematic development.