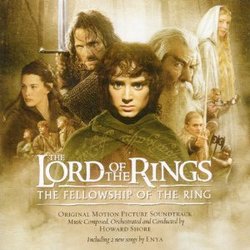 Review: Lord of the Rings: The Fellowship Of The Ring

Film fantasy fans worldwide understand that we as a collective have always been the movie-going equivalent of battered housewives. After a wonderful half-decade romance in the early eighties (which gave us the classics Excalibur, Conan The Barbarian, and Dragonslayer), Hollywood really started taking us for granted with harebrained atrocities such as Dragonheart, Conan The Destroyer, and even Willow (admit it, folks – it ain't good). For well over a decade now, the powers-that-greenlight-movies have fallen so out of touch with the fantasy genre that the least-sucky recent example is Kevin Sorbo's deadpan funny but still-cheeseball Kull The Conqueror. Now how sad is that?

Well, as it turns out, not sad at all. Not anymore. Not now that Peter Jackson has unleashed part one of his Lord of the Rings adaptation on a world desperately hungry for some grand old-fashioned cinematic spectacle and much-needed escapism. Just in the nick of time, too. As each recent pile of fantasy dog dirt (don't get me started on Dungeons & Dragons) promised to be the last nail the genre's coffin, Jackson and company have unceremoniously stepped in and pried the lid clean off.

Chief amongst Jackson's strongest assets is composer Howard Shore, whose score for the first installment The Fellowship of the Rings is one of the most thrilling and moving leitmotivic compositions I have heard since John Williams' The Empire Strikes Back. With a vast array of musical colors ranging from a thundering Maori male chorus to a rustic, Celtic-sounding folk ensemble, Shore paints his canvas as wide as Jackson's sprawling epic and then some. This is the kind of music (and the kind of movie) that made me start buying soundtrack albums twenty years ago, and the CD is a brilliantly cohesive seventy-two minute distillation of the two and a half hours Shore composed for the film.

We begin with the "Prologue", a powerful and insinuating prelude featuring a mystical choir and some truly gigantic orchestral writing. Themes and motifs are slowly woven into the fabric (at last count, I heard eleven major themes over the span of the work), creeping up on you now and again, developing and growing as we go. It's nothing short of glorious, in this day and age of fast food scores that feel the need to make an impression in ten seconds or less, to hear something take its sweet time and pull you into its world gradually. "Concerning Hobbits" doles out some of the aforementioned folksy faux-Celtic passages, and it's playfully lush textures begin to hint at the emotional depth to come. Then we get "The Shadow Of The Past", which gallops up boldly and introduces co-writer Phillipa Boyen's terrifying choral "Song Of The Ringwraiths", a motif that continues on into "The Black Rider" with an undulating bass line which conjures haunting shades of Carl Orff.

This orchestral fury stays with us for a stretch, crashing and snapping at the listener all the way through the breathtaking rising strings and pounding percussion of "A Knife In The Dark" and "Flight To The Ford". The only respite offered is in the latter half of "The Treason Of Isengard", where Shore first hints at his stirring and nobles themes for the hobbits and the fellowship. Texturally, the motifs have a lot in common with pieces of Dvorak's "New World Symphony", but with a warmth all its own.

With "Many Meetings", we arrive in the film's magical elven citadel of Rivendell, and Shore provides the kind of lyrical impressionism and ethereal choral strains that made Jerry Goldsmith's Legend so beautiful, segueing straight into the first full statement of the hobbit theme. "Aniron" goes on to give us the first of Celtic songstress Enya's two contributions to the film, and Shore blends her work into his seamlessly, creating an otherworldly and lovely passage for the love of Arwen (Liv Tyler) and Aragorn (Viggo Mortenson). "The Ring Goes South" builds slowly, rising higher and higher until Shore gives us a grand first major statement of the fellowship theme. It is a big step for the film, and a defining moment for the score.

"A Journey In The Dark" begins the sections of the score that pertain to the fellowship's voyage into the ruinous mines of Moria, and the mood takes a darker turn, both heralding the majesty of the fallen dwarven world and warning of the terrors that lay within. "The Bridge Of Khazad-Dum" is a thrilling action highlight, with not one but two adrenalized readings of the fellowship theme, all amidst thundering drums and sinister Maori choir. The track dovetails into a heartbreaking passage for solo soprano before moving into the spooky Middle Eastern textures of "Lothlorien" (voiced in part by Elisabeth Fraser) and the stately but foreboding "The Great River".

At this point, Shore's ultimately nine-hour score for Tolkien's trilogy begins to move to it's first conclusion, and the power of the extremely moving "The Breaking Of The Fellowship" cannot be understated here; it is a seven minute masterpiece of film scoring, bringing to a point all of the emotions of the journey we've just taken. It segues smoothly into Enya's second song, "May It Be", which keeps in pitch-perfect tone with all that has preceded it, and the disc rounds out with yet another masterful and triumphant restatement of the fellowship theme.

Before I start gushing again about how great this CD is, let me get something off my chest (in case it wasn't painfully obvious already): I am a big Tolkien fan. But more than just that, I am a big movie fan Even with that in mind, this is a must own score if ever there was one. If you have ever called yourself a film score fan, you've got no excuse not to get this disc. Every track is a highlight in its own right, and the breadth and scope of Shore's achievement gets more and more impressive every time I heard it (and that has been quite a lot over the last two months). To sum up, the only thing that may best this disc is a complete release of Shore's entire score for the film. Either that, or his work for the next two installments for which I will be waiting with baited breath.

In the meantime, thank you Mr. Jackson, thank you Mr. Shore, and thank you to anyone else who helped in the creation of this film and score. You've all given us something quite marvelous.