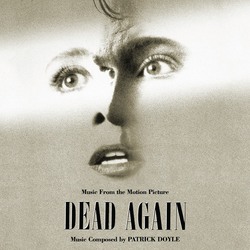 Paramount Pictures and La-La Land Records are happy to announce the expanded and newly remastered score to Patrick Doyle's masterpiece Dead Again. Clocking in at over 78 minutes, tons of material has been added to this lush and bombastic score.

Full of melody and intrigue, composer Doyle takes the listener deep inside the psyche of Kenneth Branagh's intense film and helps them navigate through the twist and turns of this reincarnation Hitchcockian thriller.

Film composer/score historian Brain Satterwhite examines this twisted film noir exploring the film, its inspiration and Doyle's intricate score. Dan Goldwasser's art direction rounds out this gothic thriller's package. One of our favorite scores of the 1990's finally gets to be heard in all it's glory (even featuring music cut from the final film)!