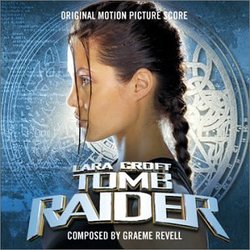 Angelina Jolie stars in the title role of Lara Croft: Tomb Raider.  She easily manages to fill both the shoes and bust-line of this popular video game character as she makes her leap from the game screen to the movie screen. Lara Croft is basically a high-tech female "Indiana Jones". She was born into wealth and spends her time traveling the globe and risking her life to find numerous archeological treasures.  Director Simon West has done a good job in transforming the video game into a movie that develops the character of Laura Croft in an effort to share her with individuals who may not be video game enthusiasts.

In Lara Croft: Tomb Raider, Lara is faced with her greatest challenge as she races against an evil, secretive society, the Illuminati, in a search for an object that is hidden in both space and time.  Lara's journey takes her into exotic, dangerous lands and she faces challenges that not only test her strength and intelligence, but her emotions and virtues as well.

While this movie is not the greatest ever made, it is the best video game adaptation ever made.  Some people laugh at the idea, but transforming a popular shoot-em up game into something with a plot is a task that would haunt almost any screenwriter.  When developing a story based on a character that never talks and possess a personality unique to every individual that plays the game, that effort must be applauded.  Personally I think the movie would have been more satisfying if it had a longer run time.  With more time, the director would not have been pressured to make the action scenes and story line so choppy.  Yes, we know Lara must find the artifact and time is rapidly running out, but couldn't that shower scene have lasted a little longer?

After a few last-minute decisions by the moviemakers, Graeme Revell was brought on board to develop the score for this motion picture. In ten days he scored 70-minutes of music, which is an astonishing and impressive rate of development for something that actually sounds good.  Overall, Lara Croft: Tomb Raider is an awesome mix of traditional orchestral score laced with eastern mysticism and video game techno. Unfortunately for soundtrack connoisseurs the track listing on the CD release was mislabeled; the correct version has been listed above (courtesy of Mr. Revell).

In the opening track "Main Titles/Lara Croft at Home" a mix of drums native chants combined with a slow haunting mix of strings submerges the listener into the mysterious world of Lara Croft.  The composer consistently makes good use of traditional and exotic instruments overlaid with resonant chants and other vocals to build mystery and fuel the action. "Home Invasion" is one of a few tracks that stray from the orchestral score to deliver a more edgy and electronic tone.  A strong Techno groove and sporadic synthesized drums help to quicken the pulse as we see Lara running around in her pajamas while engaging in a firefight with multiple armed special-ops soldiers.

I'm glad that Revell has used his judgment when applying the techno elements throughout the score; just because the movie is based on a video game doesn't mean it has to continuously sound like one.  "The Brahmin" is the only track in the score that I have seriously mixed feelings about.  The listener is assaulted in the beginning by the sound of servo motors and hydraulics whining repeatedly with a movement that sounds like it should have been entitled "Attack of the Power Loader" (you know, that yellow exo- skeleton forklift from Aliens).  Luckily, the piece is over almost as quickly as it starts.

Remember, Lara Croft: Tomb Raider is based on a video game about a scantily clad babe who back-flips and shoots the hell out anything that moves.  Even if you have never played the game, the movie leaves you with a good impression of who Lara Croft could be if she existed in real life.  If you have played the video game, I would appreciate it if you could tell me where I can find the Pharos Pillar in Tomb Raider: Last Revelation.