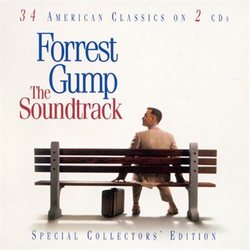 Everyone reading this review has probably had the sinking feeling of seeing a new soundtrack release sitting on the racks at the local record store, only to discover on closer examination those fearful words "Songs From And Inspired By". Ah, the arbitrary song collection: a staple of modern music, and the bane of film score fans around the globe. Every once in a while, though, a song collection soundtrack rolls along that actually has something to do with the film at hand apart from greedy corporate synergy. Even more rare is the song soundtrack that is a vital part of the storytelling process. But it shouldn't surprise anyone familiar with the 1994 Best Picture winner that Robert Zemeckis' Forrest Gump provides the basis for one of the very good ones.

As Zemeckis and screenwriter Eric Roth state in the liner notes of this new "Special Collector's Edition", timed to coincide with the film's DVD release, Gump the film is all about a journey through time. (Interestingly, this is a career-spanning theme from the guy who also gave us the Back To The Future series.) And nothing can take a person from the 1950's to the 1980's quite like music.

To get us there, this thirty-four track double CD set boasts an enormous range of musical styles and performers. From standards like Creedence Clearwater Revival's Vietnam anthem "Fortunate Son" and The Byrds' "Turn! Turn! Turn! (To Everything There Is A Season)" to the more eclectic choices like The Rooftop Singers "Walk Right In" and "Stoned Love" from The Supremes, Gump casts its net wide and uses that diversity in recreating the patchwork-Americana tone of the movie. Just check out the track list yourself. There's something for everyone here, even more so than the original release with the new addition of bonus tracks "Running On Empty" by Jackson Browne and Fleetwood Mac's "Go Your Own Way". Rounding out the musical journey is a lovely suite of Alan Silvestri's touching score, though die hard fans will no doubt want the separate score album as well, if they don't have it already.

Overall, this is a nice package with a lot of great tunes, an unpretentious ready-made mix of music that should please both the young and young-at-heart. Perfect for the next time the family has a barbecue and no one can agree on what to listen to.